The Toshiba Satellite U845W is the first ultrabook with a widescreen display featuring a 21:9 aspect ratio. The screen measures 14.4 inches diagonally and has a resolution of 1792 x 768 pixels. 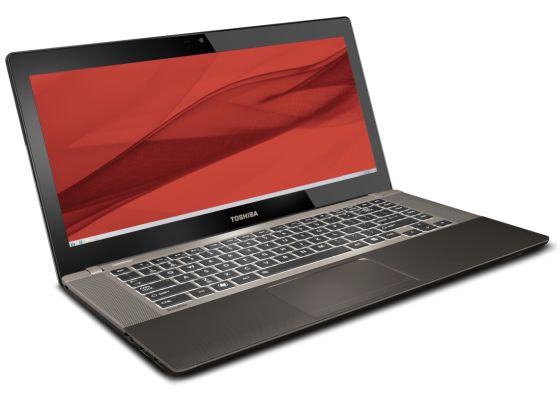 Toshiba is positioning the U845W as an entertainment device, and the ultra-wide display lets you watch movies in the same aspect ratio in which most recent films are shot. It also provides a heck of a lot of screen real estate for anyone looking for an ultraportable lapotp with some serious multitasking capabilities.

You can watch a video on one side of the screen while surfing the web or writing a document on the other. Toshiba even offers a Smart View utility which lets you divvy up the screen space into distinct portions so that it’s easier to snap windows to take up just 50 percent, 30 percent, or some other percent of the screen.

Despite the wide display, the laptop has a standard-sized keyboard. It’s actually the same backlit keyboard found on all of Toshiba’s other ultrabooks. But Toshiba took advantage of the extra space to the left and right of the keys to include stereo Harman Kardon speakers. Did I mention Toshiba is emphasizing the Satellite U845W’s entertainment performance? 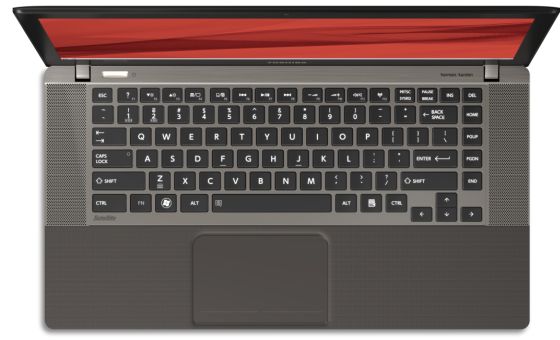 Entertainment doesn’t necessarily cover hard-core gaming though. The laptop will ship with an Intel Ivy Bridge processor which offers significantly better graphics performance than earlier Intel chips. But there are no options for discrete graphics, so serious gamers might want to look elsewhere.

While the Toshiba Satellite U845W has an unusual display size, the rest of the specs are all pretty much in keeping with Intel’s definition of an ultrabook.

The laptop measures 0.82 inches thick, weighs about 3.5 pounds, and will be available with either a solid state disk or a hybrid storage solution with a large hard drive and smaller solid state cache disk.

The U845W has 3 USB 3.0 ports, an HDMI port, Ethernet jack, and memory card reader. There are no VGA or USB 2.0 ports. The laptop features a 4 cell, 54Whr non-removable battery which should be good for up to 7.5 hours of run time.

Toshiba used a brushed aluminum material for the chassis, but also added a rubberized texture to the lid, palm rest, and bottom of the computer to make it easy to grip.

You’ll be able to pick up a Toshiba Satellite U845W starting in late June or early July for $999 and up. While the notebook will launch with Windows 7, Toshiba has also tested the U845W with Windows 8 and says the widescreen display works great with Metro-style apps.

One reply on “Toshiba launches U845W ultrabook with ultra-wide display”