Earlier this year Toshiba introduced its first netbook with an Intel Atom N2600 Cedar Trail processor. But if you’ve been waiting to get your hands on the Toshiba NB510 in the US… you’re going to be waiting a long time.

A Toshiba executive just confirmed to me that Toshiba America has no plans to offer any new netbooks in the US. 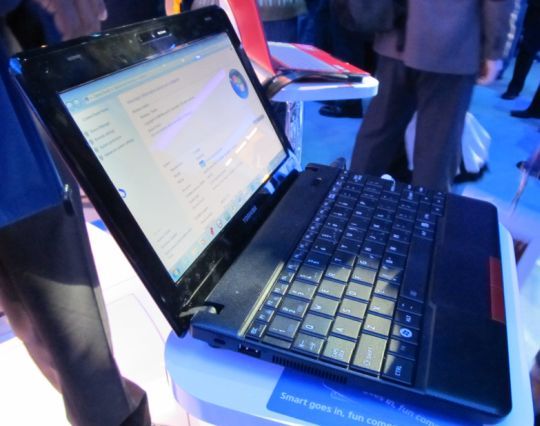 Instead, the company is focusing on ultrabooks such as the Toshiba Portege Z830 which offers a similar thin and light form factor but much better performance than a typical netbook.

It also costs a heck of a lot more, with prices around $800 and up, while netbooks typically sell for $300 and less these days.

Toshiba has been making netbooks for a number of years and the company’s earlier entries were popular with netbook enthusiasts thanks to their large, easy to use keyboards — something which wasn’t always a given on tiny laptops with 10 inch displays.

But netbooks aren’t selling like they used to, and Toshiba isn’t the only company that’s pulled out of the US netbook space recently. Dell and Lenovo are officially out of the game, and Samsung and Sony haven’t bothered launching any new models in the US this year.

Acer, Asus, and HP are still offering netbooks in the US, and Toshiba may still sell some models internationally. But the Toshiba NB510 Cedar Trail netbook that we saw at CES is going to be a no show in the States.

20 replies on “Toshiba is done with netbooks (in the US)”