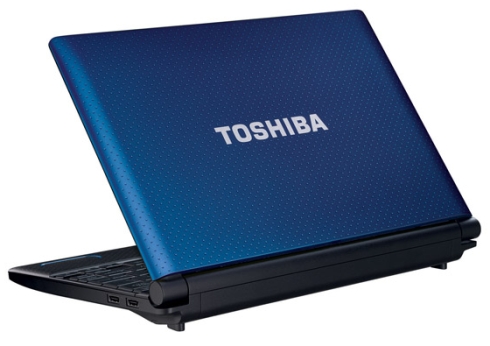 Yesterday we reported on the Toshiba NB520, a new 10 inch netbook with a dual core Intel Atom N550 processor and Harmon Kardon stereo speakers. But it looks like the NB520 isn’t the only new netbook from Toshiba. The company has also introduced the NB500, which features a similar design, but more wallet-friendly features.

The Toshiba NB500 has the same colorful lid options as its pricier sibling. But this model features your average netbook speakers, which is to say you’re probably going to want a good pair of headphones if you plan to spend a lot of time listening to music on this mini-notebook. Netbook News reports that the NB500 also lacks the ability to charge your phone or other gadget through a USB port when the netbook is turned off.

I should point out that I’ve seen conflicting reports on the exact specs of the NB500. Some sites claim it does have Harmon Kardon speakers and/or an Atom N550 dual core CPU, while others suggest it has an N455 CPU. Unfortunately the press release doesn’t make things very clear, but I suspect we’ll have more details (and pricing information) when the netbook goes on sale soon.