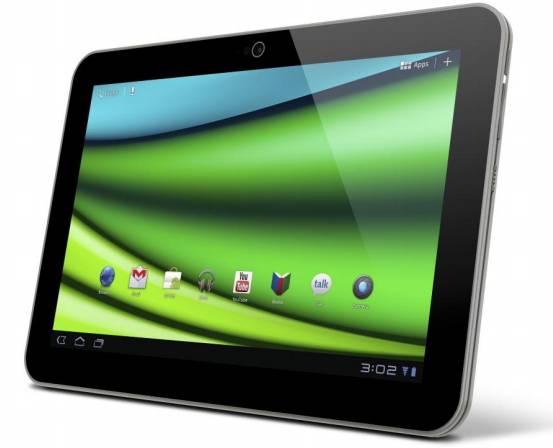 Toshiba is adding a Android tablet to its lineup. The Toshiba Excite X10 features a 1.2 GHz TI OMAP 4430 dual core CPU, a 10.1 inch, 1280 x 800 pixel IPS display with wide viewing angles, measures 0.3 inches thick and weighs 1.2 pounds, making it once of the thinnest and lightest 10 inch tablets around.

The Toshiba Excite X10 doesn’t replace the Thrive family of tablets. Instead, Toshiba is positioning the Excite as a premium tablet. A 16GB model will cost $529 while a version with 32GB of storage will sell for $599.

Toshiba is using a magnesium case for the tablet in order to reduce weight while providing a durable design. The tablet also has Corning Gorilla GLass for a sturdy screen.

While the 10 inch Thrive tablet has full-sized USB, HDMI, and SD card ports, the Excite X10 has microUSB and HDMI ports and a microSD card slot. It also has a 2MP front-facing camera and 5MP rear camera and support for DLNA.

The company hopes to ship the Excite X10 with Android 4.0 Ice Cream Sandwich, but it may hit the streets with Android 3.2 and receive an over-the-air software update shortly after launch.

The new tablet will also have some of the software originally developed for the Thrive, including Toshiba’s custom file manager and media player apps.

Toshiba will continue to offer the Thrive 10 inch tablet for around $399, and the company plans to introduce a model with support for AT&T’s 4G HSPA+ mobile broadband network soon for about $80 more.

You can also still pick up the 7 inch Thrive tablet for $380 and up.

At CES this week Toshiba will also be demonstrating a few new concept devices including tablets with 5, 7, and 13 inch displays and an ultrabook with a 14 inch screen.