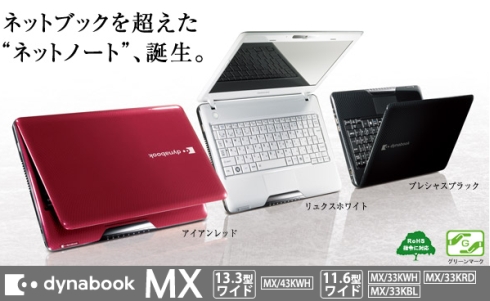 Toshiba is introducing two new members of the Dynabook laptop family in Japan. The Toshiba Dynabook MX/43 is a 13.3 inch laptop with a dual core Intel Ultra Low Voltage processor. But there’s also a smaller model called the Dynabook MX/33 with an 11.6 inch, 1366 x 768 pixel display that could go head to head with similarly sized laptops such as the Dell Inspiron 11z and Acer Aspire 1410.

The laptops should be available in japan on October 22nd for about $1300 and $1000 respectively. No word on if or when Toshiba plans to launch these laptops in the US, but it’s a safe bet that they’ll get a price drop if they make it to this hemisphere.