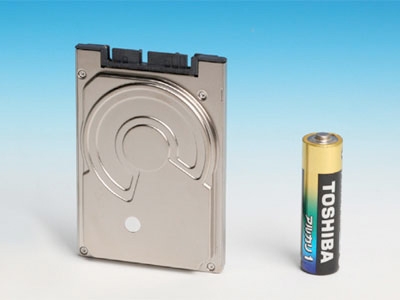 Toshiba’s latest hard drive is both really big, and really small. On the one hand, it can hold up to 320GB of data, which hardly makes it the highest capacity hard drive for mobile devices. But it’s better than the 160GB and 250GB hard drives that come with most netbooks. But at just 1.8 inches, the 1.8 inch hard drive is small enough to fit in an iPod or a super-thin netbook. (The original HP Mini 1000 had a 1.8 inch hard drive in order to keep the netbook less than 1 inch thick).

The new Toshiba MKxx33GSG series of hard drives have spindle speeds of 5400rpm and 16MB cache. In other words, they’re also a lot faster than the 4200RPM hard drive used in that original HP Mini 1000.

The hard drives are also available in 250GB and 160GB versions.

Toshiba is also releasing a cheaper model, the MK1235GSL, which can hold 120GB and which has a spindle speed of 4200RPM.