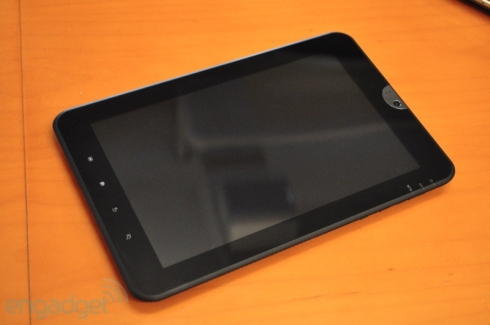 Toshiba has unveiled its second 10 inch Android tablet in advance of the Consumer Electronics Show. The first of Toshiba’s Android tablet was the Folio 100, which is currently available in Europe but which never made it to the US. The new model doesn’t have a name yet, but it has a higher resolution display and twin cameras. It will also run Google Android Honeycomb when it ships, while the Folio 100 currently runs Android 2.2 Froyo.

Engadget’s Joanna Stern got a little hands-on time with the new Toshiba tablet and she reports that it has a 1280 x 800 pixel capacitive touchscreen display, an accelerometer and ambient light sensor. It has a 5MP camera on th eback and a 2MP camera on the front, a full sized USB port and HDMI output, as well as a mini-USB port and SD card slot.

The tablet has a dual core NVIDIA Tegra 2 processor and a spill-resistant case. It weighs 1.7 pounds, which makes it just a tad heavier than the Apple iPad.

The new Toshiba tablet is due out in the first half of 2011 — which makes sense, because that’s when Google is expected to release Honeycomb.