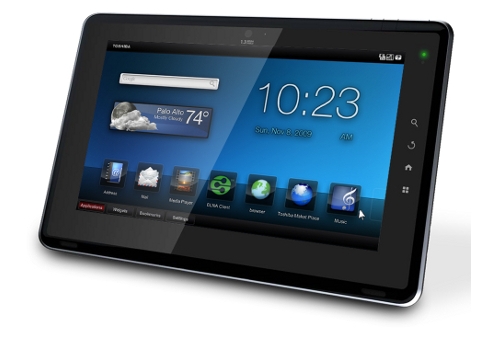 The Toshiba Folio 100 is a 10 inch tablet with Google Android 2.2 and a dual core NVIDIA Tegra 2 processor with support for HD video playback and 3D graphics acceleration. In terms of hardware, it’s pretty much state of the art stuff, but unfortunately it’s a bit limited on the software side since it comes without access to the Google Android Market. Instead it comes with a Toshiba-branded market.

Still, if you’ve been waiting to get your hands on one of these little guys since Toshiba started showing them off a few months ago, it looks like the wait is over… in Europe at least.

The tablet has a 10.1 inch, 1024 x 600 pixel capacitive touchscreen display with support for up to 4 touch inputs. It has 802.11b/g/n WiFi, Bluetooth, and optional 3G. There’s an HDMI output, USB client and host capability, 16GB of storage, and an SD card slot for expasion. The 22.6 Whr battery is supposed to run for up to 7 hours.

Toshiba hasn’t made any official announcements about US availability, but last I’d heard the Folio 100 tablet won’t be shipping in the US until early next year.

One reply on “Toshiba Folio 100 tablet now shipping in Europe”