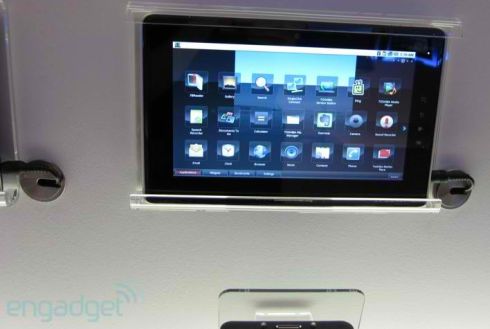 What do you get if you take a Toshiba AC100 Android powered netbook, add a touchscreen display and remove the keyboard? Apparently what you get is the Toshiba Folio 100, an Android Tablet that’s seeing the first light of day at the IFA consumer electronics show in Berlin this week.

Although we’ve been hearing rumors about the tablet for a few weeks, this is the first time we’ve gotten a chance to see the thing up-close-and-personal, assuming you consider looking at photos snapped by journalists and bloggers in Germany is personal.

Anyway, the folks at Pocket Lint, Netbook News.de, and Engadget have all managed to snag some time with the tablet, and here’s what we know. It has a 10.1 inch, 1024 x 600 pixel capacitive touchscreen display with support for multitouch. The tablet has an NVIDIA Tegra 2 dual core chipset and runs Google Android 2.1. THere’s a 1.3MP camera and 16GB of storage.

The Folio 100 also has 802.11b/g/n WiFi, Bluetooth, and 3G connectivity, an HDMI output, 2 built in speakers and a mic, a USB port and SD card reader. The battery is reportedly good for up to 7 hours o run time, and the default browser is Opera Mobile with support for Adobe Flash. Like the Toshiba AC100, the Folio 100 also comes with some preloaded software including a PDF reader, eBook reader and RSS reader.

Unfortunately there’s no word on the pricing or launch date yet. It’s also not clear what regions the tablet will be available in. While the Toshiba AC100 is already shipping in Japan and due out soon in Europe, I haven’t seen a US release date for that model yet either.

You can check out a short hands-on video from Netbook News.de after the break.