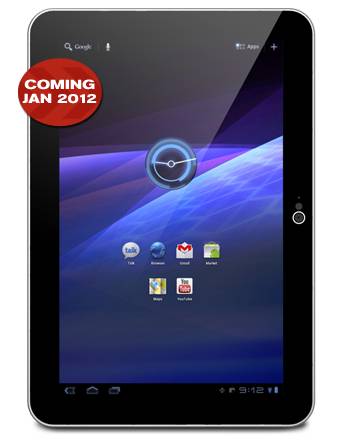 The Toshiba Excite AT200 is a new Android tablet from Toshiba. Like the company’s Toshiba Thrive tablet, the Excite has a 10.1 inch, 1280 x 800 pixel display, but the new model is thinner and lighter than its predecessor, and features a 1.2 Ghz TI OMAP 4430 dual core processor instead of an NVIDIA Tegra 2 chip.

Toshiba hasn’t yet announced the US launch date for the tablet, but we’ve already heard that it will launch in Germany in January. Now Toshiba Canada is also showing a January, 2012 release date for the Excite — although MobileSyrup reports that the launch date could actually be February.

The tablet will ship with Google Android 3.2 Honeycomb, feature 16GB to 32GB of storage, a 2MP front-facing camera, and a 5MP rear camera.

While the Toshiba Thrive tablet I reviewed this summer stood out from the crowd thanks to its full-sized SD card, USB, and HDMI ports, the Toshiba Excite has microSD and HDMI ports and a mini USB port. It also lacks the user replaceable battery found in the Thrive. Those are some of the sacrifices you make when you try to make a tablet thinner.

One reply on “Toshiba Excite AT200 tablet launching in early 2012”