Over the past few years we’ve seen most major PC makers release inexpensive laptops running Google’s Chrome operating system. Most have the kind of features you’d expect from a low-cost laptop, including 1366 x 768 pixel displays, 2GB of RAM, and other entry-level specs.

But Toshiba’s taken a slightly different approach with the Chromebook 2. 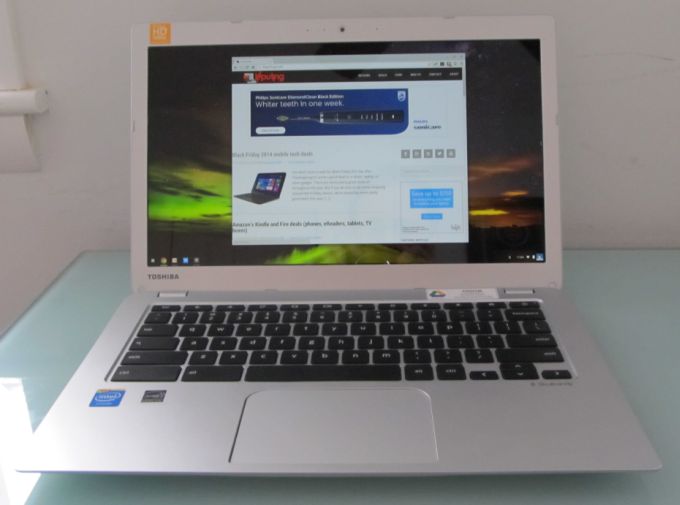 In other words, the Toshiba Chromebook 2 combines some entry-level features (like the Bay Trail processor and small amount of storage) with hardware you’d normally expect to find on a more expensive laptop (including the optional high-res display and high-speed WiFi).

Toshiba loaned me a Chromebook 2 with a full HD display which I’ve been testing for the past few weeks, and in some ways it’s the best Chromebook I’ve used since the Google Chromebook Pixel. But in other ways it leaves a bit to be desired.

The Toshiba Chromebook 2 has a great screen and offers acceptable performance. But if you care more about speed and/or battery life than the display, there are some other Chrome OS laptops that may be a better fit… and you can probably buy them for less money.

Toshiba’s first Chromebook launched in early 2014 offering a 13.3 inch screen, and an Intel Celeron 2955U Haswell processor. There was no option for a full HD display on that model though.

For its new model, Toshiba chose a less powerful Celeron N2840 Bay Trail processor. In some ways that’s a good thing, since it allowed Toshiba to make its new Chromebooks fanless: the system uses passive cooling instead of a spinning fan to keep the computer from overheating.

Toshiba’s new Chromebook is also a little lighter than the original. While the first Toshiba Chromebook weighed 3.3 pounds, the second-generation model weighs 2.95 pounds.

Intel’s Bay Trail processor could theoretically also offer longer battery life: and if you get the Chromebook 2 with a 1366 x 768 pixel display, it might. But I’ve found that the Chromebook 2 with a full HD screen gets around 6 or 7 hours of run time, which seems to be close to the same amount of battery life others have reported for the older model. 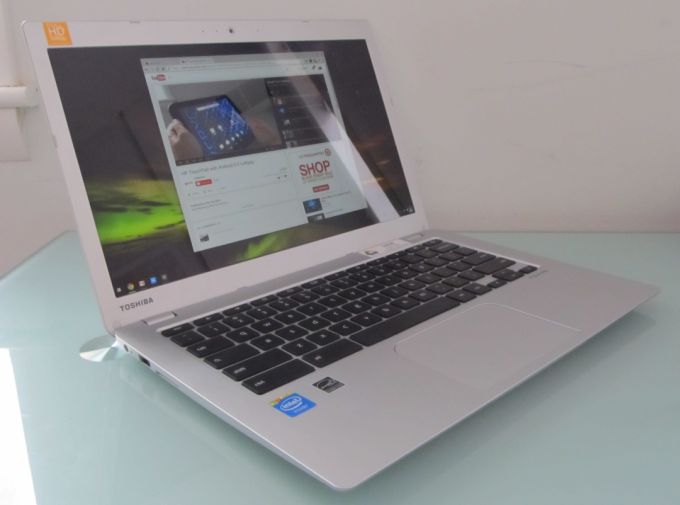 Like other Chromebooks, this laptop ships with Google’s Chrome operating system. It’s a light-weight operating system that boots quickly, resumes from sleep almost instantly, and downloads updates automatically in the background. It also relies heavily on one app: the web browser.

You can download and install some Chrome apps for use even when you’re not connected to the internet. Angry Birds, Gmail, Kindle Cloud Reader, Google Calendar, and a number of other apps and games offer some offline capabilities. But for the most part a Chromebook is designed for someone who expects to use the laptop primarily when it’s connected to the internet — which is why it doesn’t have a lot of built-in storage. You don’t need a big hard drive if you stream music, movies, and other content from the internet, run web apps, and save your important documents to Google Drive (or Dropbox, OneDrive, or whatever).

If you want to use the Toshiba Chromebook 2 as something more than a Chrome OS laptop, it’s pretty easy to run Ubuntu or other Linux-based operating systems on it. Scroll down for more details. But Chrome OS is an increasingly capable operating system in its own right and could make a good choice for a second or third computer. 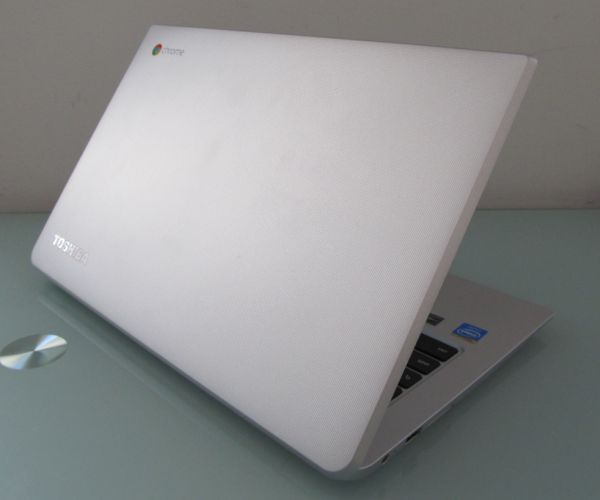 Up until recently though, Chrome OS fans who wanted a laptop with a high-resolution display haven’t had a lot of good options.

Google’s Chromebook Pixel has a 2560 x 1700 pixel display, but it also has a rather expensive starting price of $1299. Acer offers a $380 Chromebook with a 1920 x 1080 pixel screen, but it has an NVIDIA Tegra K1 ARM-based processor rather than an Intel chip. It’s also more expensive than Toshiba’s Chromebook 2.

So while the Toshiba Chromebook 2 might not be quite as fast as Toshiba’s first Chromebook, it’s the most affordable Chrome OS laptop with a high-resolution display. It’s also speedy enough for most day-to-day tasks. I had no trouble surfing the web with a dozen browser tabs open, streaming HD video from YouTube, Netflix, and other online video services, and running web apps such as WordPress (I wrote most of this review on the Toshiba Chromebook 2).

The Toshiba Chromebook 2 looks a lot like its predecessor… which is to say that at a glance it looks a lot like a MacBook. It has a gray/silver body, a black chiclet-style keyboard, and a relatively slim case that measures less than 0.8 inches thick. 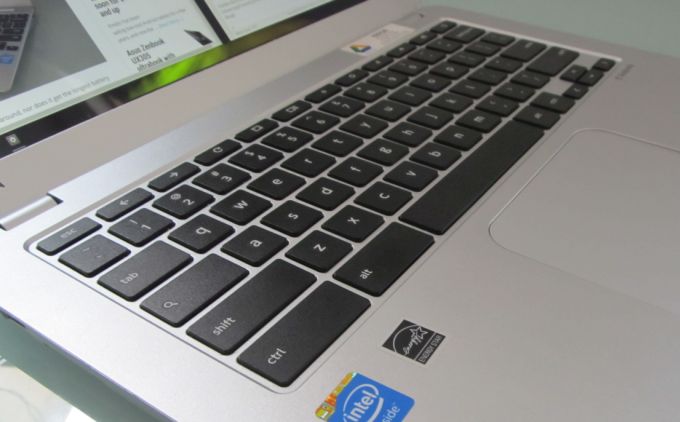 But the Toshiba Chromebook 2 has a case made of plastic rather than aluminum. Press down in the center of the keyboard, and you’ll feel the entire keyboard give a little bit. 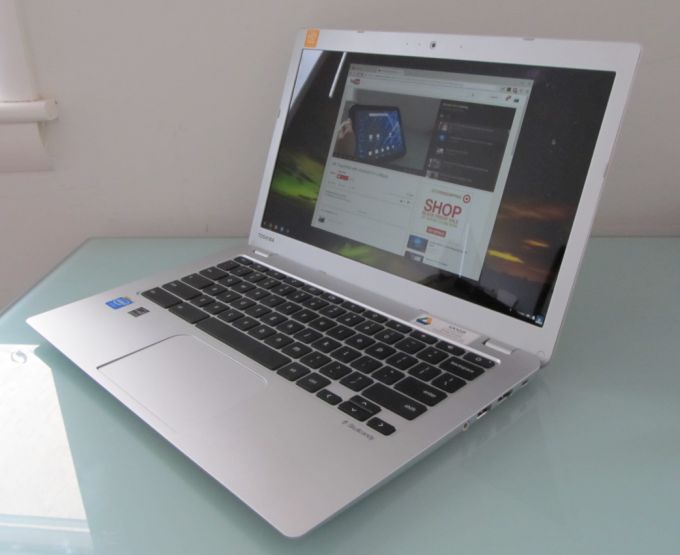 Still, for a cheap laptop, the Toshiba Chromebook 2 is a nice looking machine. It has a dimple-textured plastic lid that doesn’t show off your oily fingerprints, and features a large touchpad below the keyboard. 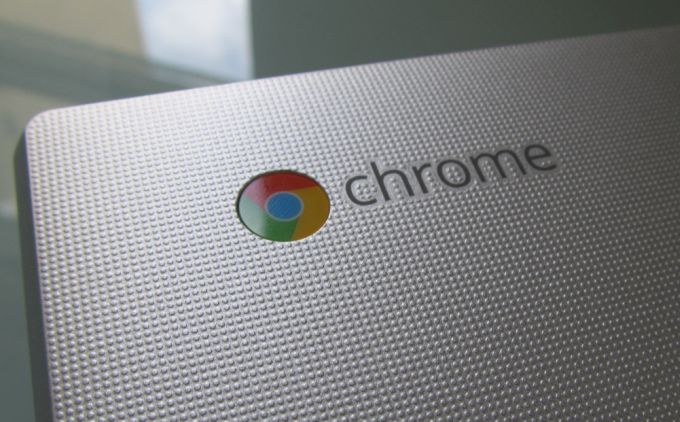 Toshiba says the audio has also been “fine tuned” by Skullcandy, whatever that means. In practice, the Toshiba Chromebook 2 has some of the loudest laptop speakers I’ve ever heard. But while the audio is loud, it’s also very thin: there’s not a lot of bass or mid frequency.

The most distinctive feature of the model Toshiba loaned me is the display. The Chromebook 2’s high-resolution screen lets you take advantage of HD videos, see more detail in photos, and view more content on a website without scrolling or zooming. 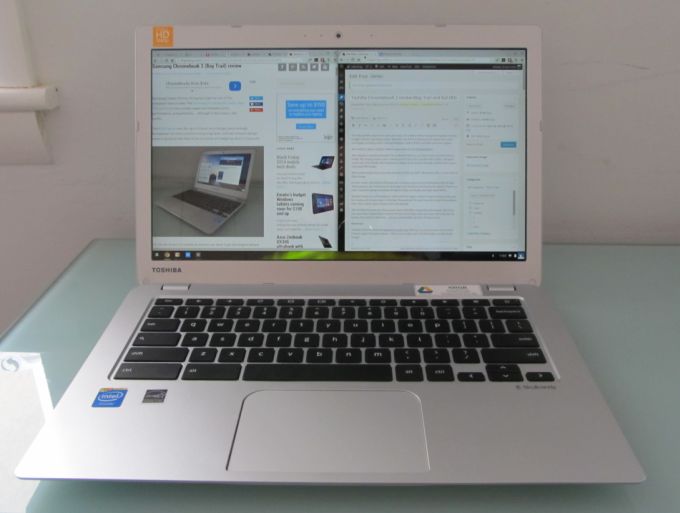 That last element can be a bit of a mixed blessing. On the one hand, I’ve frequently found myself opening two different websites in side-by-side windows on the Chromebook 2. On the other hand, I’ve sometimes found myself squinting at the screen because text was a little too sharp.

You can adjust the screen resolution from the Display Settings menu, but using a non-native resolution means that while text isn’t as tiny, images aren’t as sharp and you can’t fit quite as much text on the screen. 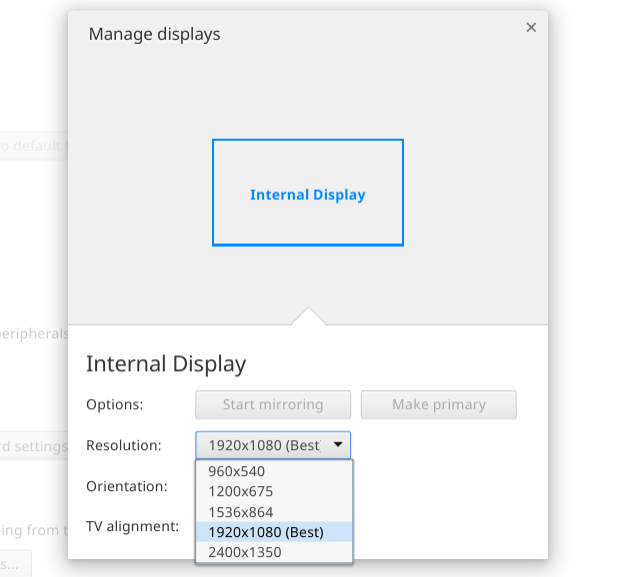 Personally, I wish there were more laptops with 13 inch, 1600 x 900 pixel displays… but there are a growing number of high-end Windows laptops with 3200 x 1800 pixel displays which actually offer a similar viewing experience thanks to pixel doubling. As for Chromebooks, it’s refreshing to have the possible problem of too many pixels rather than too few. 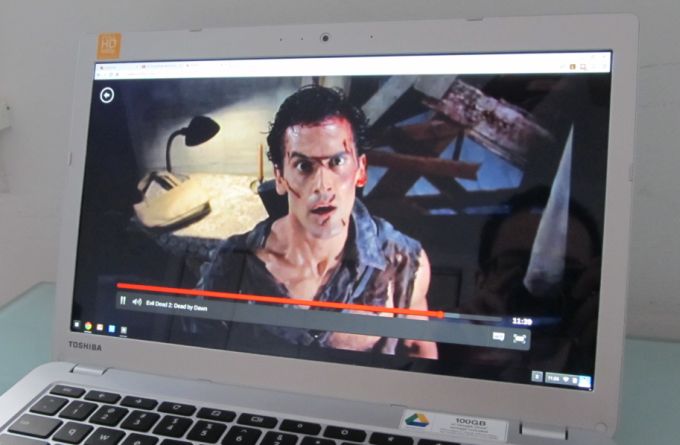 The screen has excellent viewing angles: pictures, videos, and other content look good no matter what angle you’re looking at the screen from. But the display does have a glossy finish, so it can reflect glare if you’re sitting near a window on a bright and sunny day. 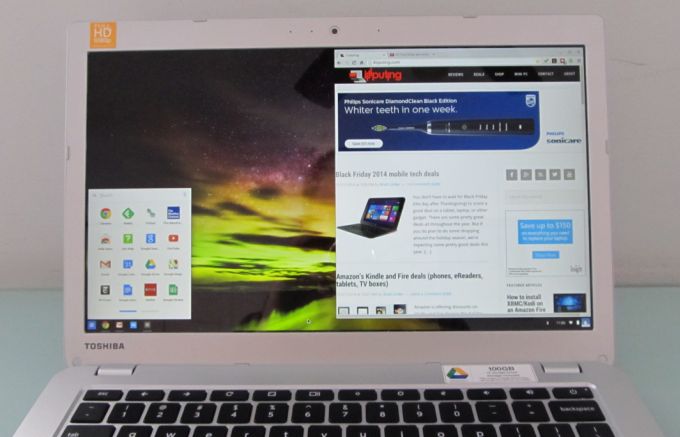 Overall, the high-resolution display makes it easier for me to get work done on this Chrome OS laptop than most other models I’ve tested in the last year or two. But that’s largely because I’m not relying on the Chromebook for truly CPU-heavy tasks such as transcoding videos.

This is the third Chromebook I’ve reviewed to feature an Intel Celeron Bay Trail processor… and it performs almost identically to the others in benchmarks. 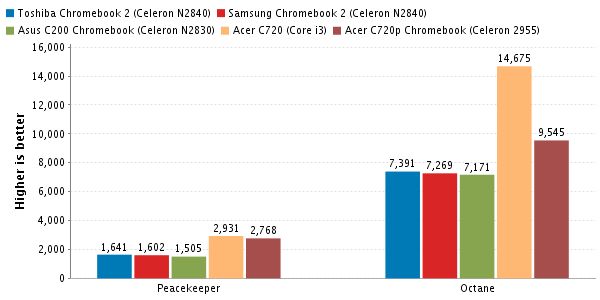 I ran the SunSpider, Google Octane, and FutureMark Peacekeeper web-based benchmarks, and if I didn’t include a legend in the charts, you’d probably have a hard time telling which model was which. 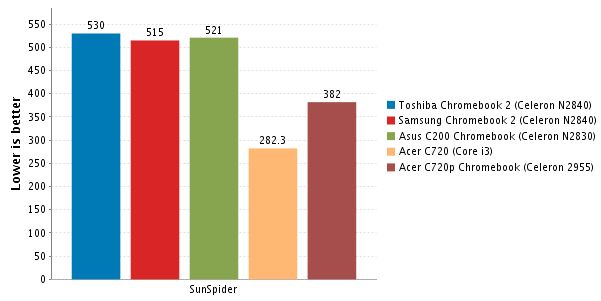 Chromebooks with Intel Haswell processors achieved much higher scores. But in terms of real-world performance, they only feel a little more responsive.

There are a few advantages to equipping a laptop with a Bay Trail chip rather than a Haswell processor. Bay Trail chips use less power and generate less heat. That means you can offer thinner and/or fanless designs and longer battery life.

In the case of the Chromebook 2, Toshiba went with a fanless design that’s lighter than the original Toshiba Chromebook, but not much thinner. 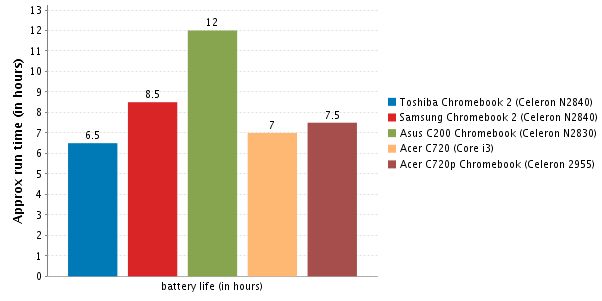 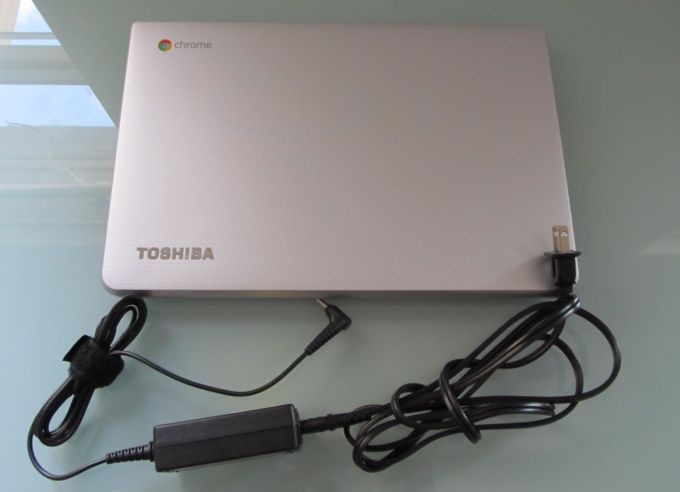 Turn the screen brightness to its highest and you’ll probably get a bit less time. Turn off the WiFi and Bluetooth and dim the screen and maybe you’ll get a little more.

Want to install Ubuntu, Debian, or another GNU/Linux operating system on your Chromebook? The first step is to enable developer mode.

You can do that by pressing the Esc+Refresh+Power keys on the laptop simultaneously. This will cause the Toshiba Chromebook 2 to reboot and show you a scary-looking screen. Just hit Ctrl+D to turn on developer mode, and then follow the on-screen instructions.

This will wipe all data from your device, so make sure to backup any files you might need before beginning. And you’ll have to login to your Google account again once the process is complete. But once you do login again, all of your apps, settings, and other data will be restored — part of the beauty of Chrome OS is that it keeps most of your data and preferences stored in the cloud so you can access it across all of your devices.

Once developer mode is enabled, you’ll see a scary screen every time you reboot your computer. But you can skip past it by hitting Ctrl+D if you don’t want to wait 30 seconds for your system to boot. 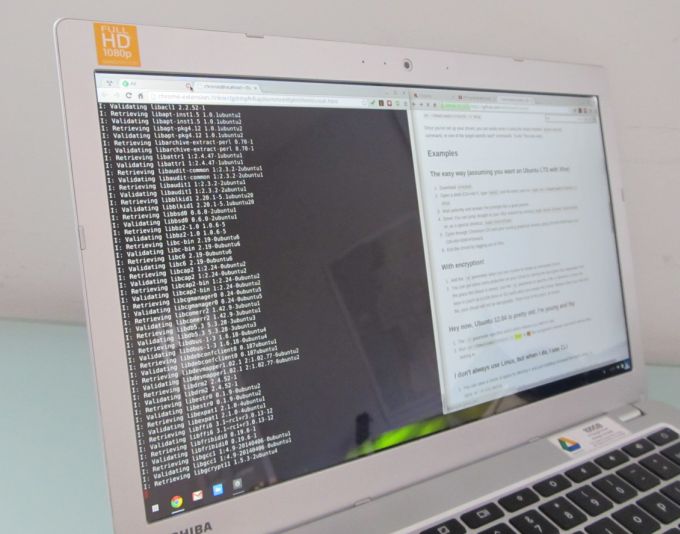 Developer mode lets you open a terminal/shell window by hitting Ctrl+Alt+t on the keyboard, and from there you can enable USB boot or perform other tasks.

While you could theoretically use these tools to wipe Chrome OS and replace the operating system, I prefer to use the Crouton script to download and install Ubuntu alongside Chrome OS in a chroot environment. 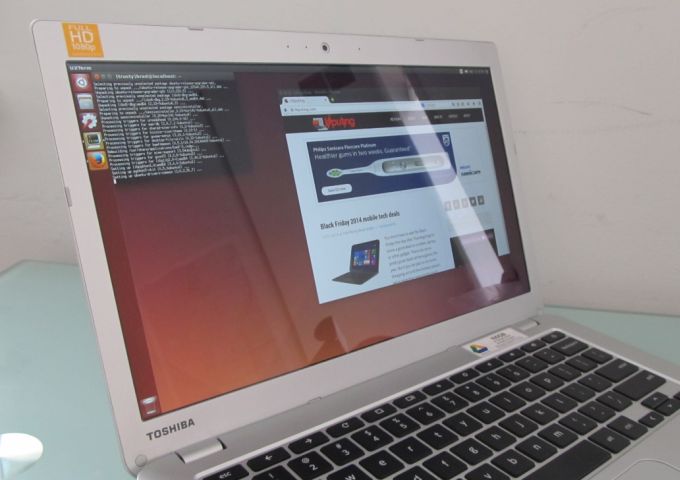 This has the benefit of letting Chrome OS and Ubuntu share a kernel… so you don’t need to load any special drivers for wireless or graphics chips or any other hardware. You don’t even need to enter your WiFi password again to connect to the internet.

You can find instructions for using Crouton at github, but basically all you have to do is type a few lines and the script will do all the work for you. I tested Ubuntu 14.04 with the Unity Desktop environment and had no problem installing apps such as Firefox and Abiword.

While the Toshiba Chromebook 2’s 16GB of built-in storage doesn’t leave a lot of room for apps, you can install LibreOffice, GIMP, or other tools for editing graphics, documents, or other data even when you don’t have an internet connection. This can make the Chromebook 2 feel more like a traditional laptop, albeit one that you probably wouldn’t want to use to store your entire music or movie collection.

There’s no shortage of inexpensive laptops running Google’s Chrome OS. Most are reasonably thin, light, and fast. But few have high-resolution displays.

Toshiba’s Chromebook 2 is one of the few… and priced at $330, it’s one of the most affordable. 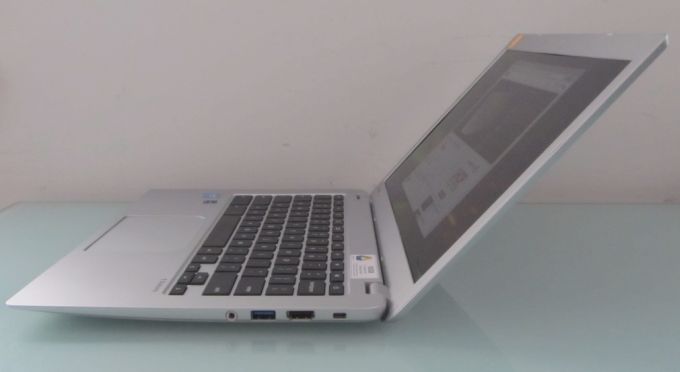 It also happens to offer reasonably good performance, long battery life (although not as long as promised), a comfortable keyboard and touchpad, and a reasonably attractive design… if you don’t mind plastic that’s supposed to resemble metal.

If you’re looking for an affordable Chromebook with a great screen, you could certainly do a lot worse than the Toshiba Chromebook 2.