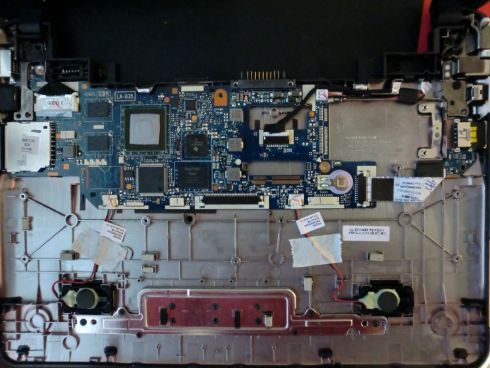 The Toshiba AC100 is one of the first Android powered mini-laptops powered by an NVIDIA Tegra 2 chip. The low power ARM-based chip combines the CPU and GPU onto a single chip and doesn’t take up a lot of space. It’s also a low power chip, which means it doesn’t generate a lot of heat and that let Toshiba built a super-thin device. But it turns out that’s just the tip of the iceberg.

The folks at the Gudinna Wiki took a Toshiba AC100 smartbook apart and found that there’s a surprisingly large amount of empty space. I suppose that makes sense, since ARM-based chips are designed to go into smartphones, which are far smaller than the Toshiba AC100. The only reason the AC100 needs to be as large as it is is to accommodate the keyboard. Still, it’s a bit startling to see how little space the actual guts of the computer take up inside the AC100.

The reason you don’t see any wireless components under the keyboard is because the WiFi and Bluetooth modules are hanging out near the screen.

You can find more photos, as well as dissection instructions at the Gudinna Wiki.