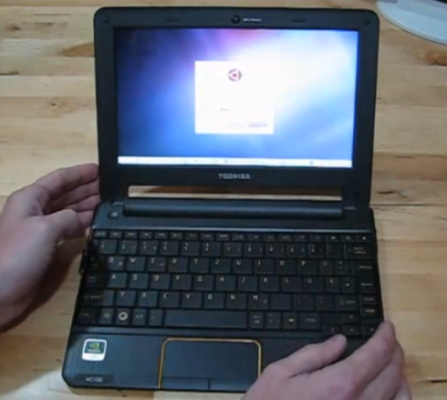 The Toshiba AC100 is one of the first netbook-style devices to ship with Google Android installed. The operating system is typically installed on smartphones or tablets with touchscreen devices — not computers with keyboards and touchpads. The Toshiba AC100, on the other hand, looks like a netbook, with a 10 inch. 1024 x 600 pixel display, a keyboard and touchpad, and no touchscreen.

What the AC100 does have is a reasonably fast dual core NVIDIA Tegra 2 chip and a thin and light design. The computer weighs just about 1.9 pounds, which is pretty light even by netbook standards.

Some folks have been underwhelmed by the way Android performs on the hardware though — and they’ve taken things into their own hands, by figuring out how to install a hacked bootloader that lets you install a separate operating system using an SD card or USB flash drive.

Chippy at Carrypad has been following the progress of these hacks for a while, and today he has posted a video showing Ubuntu Linux 10.10 RC running on the AC100.

The Toshiba AC100 has just 512MB of RAM, and relies on the SD card not just for storage, but also for swap space, which can lead to things running a bit slowly. But overall, Ubuntu seems to run quite well on the AC100, providing a much more desktop-like user experience than you would get with Google Android.

You can run the full version of the Firefox Web browser, OpenOffice.org, and other apps. What’s more, even though ARM-based chips are usually slower than similar x86 processors, apps like Firefox and the GIMP image editor seem to work just as well on the AC100 as on a typical netbook with an Intel Atom chip.

On the down side, there’s still no support for audio, 3D graphics acceleration, the webcam, video playback, or Adobe Flash yet.

Toshiba has apparently taken notice of the third party development in this area, and is working on collecting information from the user community which could lead to the release of graphics drivers and other tools for AC100 Ubuntu hackers.

You can check out Chippy’s demo video after the break.