Chinese PC maker Topton has been producing small desktop computers for years, but now the company is getting into the small laptop business.

The new Topton L4 is a mini-laptop with a 7 inch touchscreen display, an aluminum body, and one of the most affordable price tags for a product in this category. It sells for $299 and up from AliExpress, although it’s probably worth paying a little more for additional storage since the cheapest version has just 32GB.

Of course, Topton made some sacrifices to keep the price low – the computer has a fairly slow processor and a low-resolution display by 2021 standards. But it also has a decent selection of ports and an M.2 2280 slot for solid state storage. It also has an interesting design and a few features that are rare on mini-laptops this small. 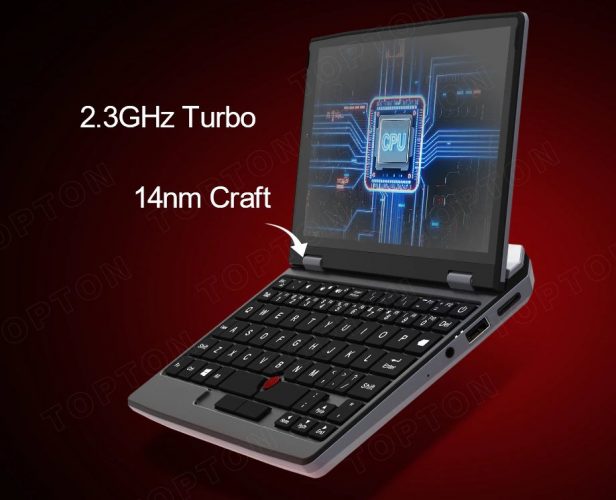 The little computer measures 185mm x 141mm x 20mm, (7.28″ x 5.55″ x 0.79″) and weighs 650 grams (1.43 pounds). While its compact size means there’s not enough room for a full-sized keyboard and touchpad, the computer has a 6-row keyboard and a Lenovo TrackPoint-like pointing stick that you can use to move an on-screen cursor, as well as left and right click buttons below the split space bar.

Since there’s no center key, I’m not sure you can use this system for scrolling, but you can always reach up and touch the display to scroll or swipe.

This isn’t the first time we’ve seen a trackpad substitute on a 7 inch mini-laptop, but other companies like One Netbook have tended to use optical touch sensors rather than pressure-sensing pointing sticks like the one the Topton L4 seems to have. 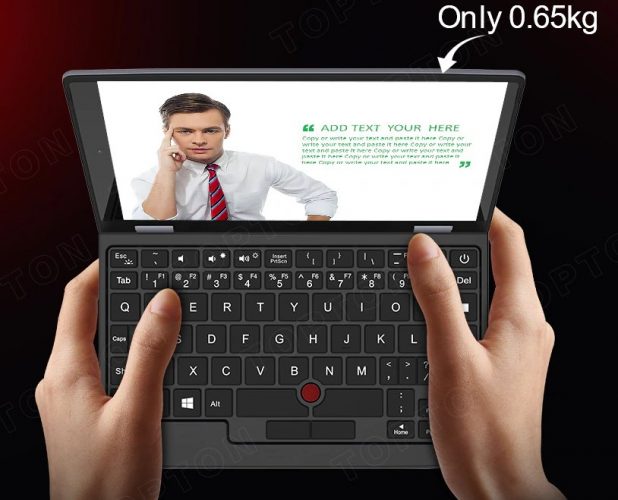 Another thing that’s uncommon in 7 inch laptops? A webcam. But the Topton L4 has one on the left side of the screen, which could make this computer useable for Zoom calls or other video conferencing applications.

That said, here’s the bad news. The Topton L4 has just a 1024 x 600 pixel display and it’s powered by an Intel Celeron J3455 processor, which is a 10-watt, quad-core processor based on Intel’s Apollo Lake architecture. First released in 2016, it trails newer chips like the 6-watt Celeron N4100 and 10-watt Celeron J4105 Gemini Lake processors in benchmarks, but it is still faster than a newer dual-core chip like the Celeron J4005 in multi-core performance, so that’s something. 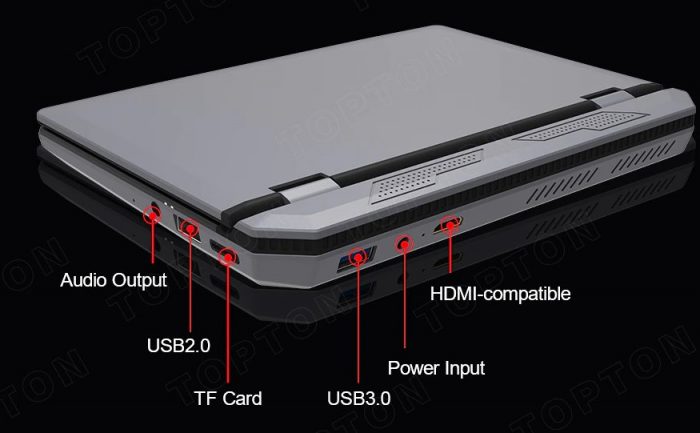 Topton says the system also supports an optional pen, but since the display cannot fold back 360 degrees for use in tablet mode, I’m not sure how useful this feature will be in day-to-day use.

Here’s a run-down of the key specs for the Topton L4:

The Topton L4 is available from Topton’s AliExpress Store, as well as from at least one third party seller. Here are some currently available pricing/configuration options:

Also keep in mind that while the RAM does not appear to be user replaceable, since the computer uses an M.2 2280 SSD, you may be able to upgrade the storage on your own.