If you’re building a mobile platform and you want it to have any chance of success, it’s got to have an app store. Samsung certainly knows that Tizen needs a quality store if it’s actually going to be a viable Android alternative. Back at the 2013 Tizen Developer Conference, the Tizen Store was shown off on stage ahead of its impending launch later this summer. 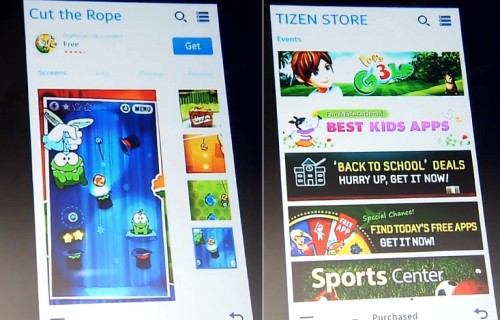 From what’s demonstrated in the video, there’s nothing particularly unique about the Tizen Store — although at this point if you’ve seen one app store, you’ve pretty much seen them all. There’s a page for promotions like back to school and freebies, sections for popular, newly released, and top grossing apps, and an ever-present store-wide search.  The Tizen Store also features a recommendation system that will suggest apps based on your shopping habits and there’s a curated Tizen Picks section, too.

App detail pages include a written description, ratings, and screenshots. Instead of “install” or “download,” Samsung has opted to label its button “get.” Presumably there’ll also be a congratulatory “App get!” notice once the installation has completed.

The Tizen Store already looks quite polished, and certainly appears to be ready for a summer launch. Several big-name apps are visible in the demo, including Cut The Rope, Vimeo, and Let’s Golf 3. Samsung has already said that the first Tizen phones will be shipping later this year, and it looks like the folks who them will have plenty of apps to choose from when they hit the Store to do some shopping.