Tizen is a Linux-based operating system that’s backed by Samsung and which is expected to ship on Samsung smartphones this year. But the OS isn’t just for mobile devices like phones and tablets.

The folks at Tizen Experts got a chance to check out an early demo of Tizen running on an ultrabook, and it looks like a pretty it offers a pretty decent desktop Linux-style user experience. But like the smartphone version of Tizen, there’s an emphasis on running web apps as well as native apps. 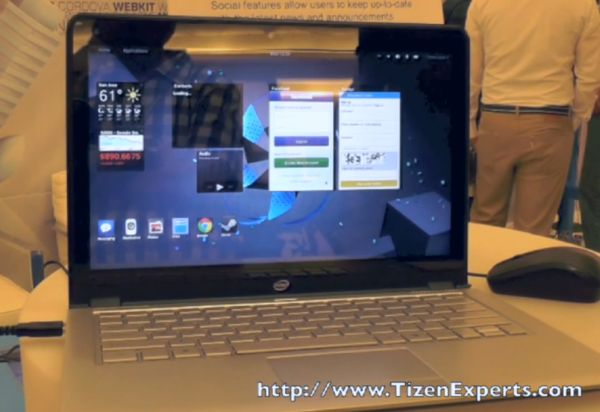 Tizen’s notebook/desktop environment is based on GNOME Shell 3, and it comes with the ability to run native Linux apps such as LibreOffice and the Chrome web browser.

But Tizen is developing a custom version of the home screen and app launcher called Tizen Shell, and supports installing and running web apps so that you can run them as if they were native apps downloaded and installed to your computer.

Tizen can also handle the Steam gaming platform for Linux as long as you have a computer with decent 3D graphics capabilities.

Much of what makes Tizen exciting is the operating’s system on mobile devices including phones and tablets — something that other GNU/Linux operating systems such as Ubuntu are just getting started on. But it’s interesting to see that it’ll also be available for traditional PCs.

The demo video shows the operating system running on an ultrabook with an Intel Core i7 Ivy Bridge processor, but the OS can run on devices with slower processors.

The code for the notebook/desktop version of Tizen shown off in the video will eventually be released as part of Tizen 3.0. As of mid-May 2013, the latest stable version of the operating system is Tizen 2.1.

2 replies on “Tizen Linux demo on an ultrabook (video)”