The first camera powered by the Tizen Linux operating system may already be shipping, but development of the open source OS is just getting started. Phones and tablets running Tizen are due out in early 2014 and later next year Tizen 3.0 should launch.

At the Tizen Developer Summit in South Korea this week, leaders outlined some of the key features that will come in Tizen 3.0, including multi-user support and support for 64-bit processing. 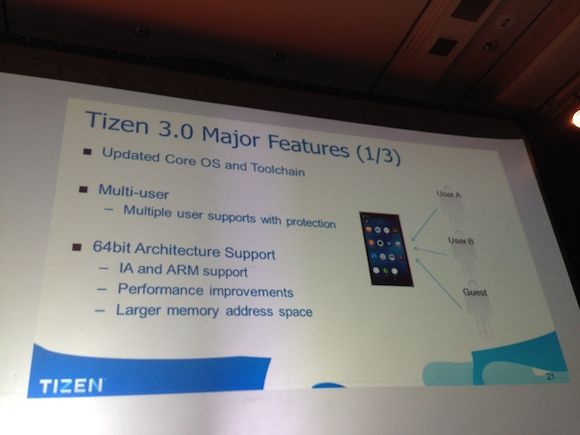 Among other things, we’ll see a new Core OS and toolchain, a new 3D graphics rendering engine, an HTML5 application runtime called Crosswalk which is based on Google’s Chromium and Blink technology, and a move from the X display server to Wayland.

In terms of 64-bit support, Tizen 3.0 will support both 64-bit ARM and Intel-based chips, which makes sense since Intel is a major backer of the project, but most phones and tablets still ship with ARM-based processors.

While that means next-gen devices that ship with Tizen may have some seriously powerful hardware, Tizen can also run on low-end devices. Som Device makers may opt for something called Tizen Mobile Lite, a stripped-down version of the operating system that will work on devices with as little as 256MB of RAM and screen resolutions as low as 320 x 480 pixels.

via The Handheld Blog and Tizen Experts