Titanium Backup has long been one of the most useful Android apps for users who root their devices and tinker with custom ROMs. It lets you backup all the apps and data on your device and restore from that backup — even after switching from a stock ROM to CyanogenMod, AOKP, or other custom firmware.

Now the developer has issued an update that goes one step further and lets you create a flashable ZIP file with all your apps and settings. 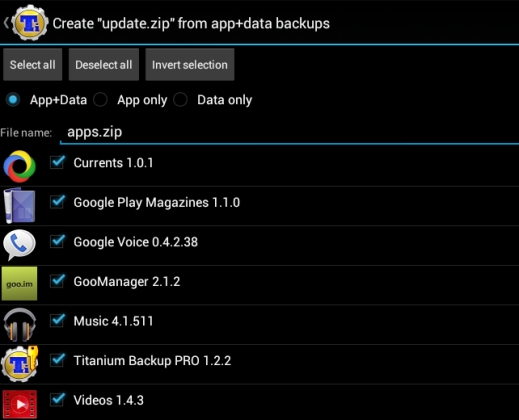 In other words, you can backup all the apps you’ve installed on your device, whether from the Google Play store or other sources. Those backups will include saved game data, account settings, and other information. And instead of running Titanium Backup to restore your apps after a factory reset or installing a new ROM, you can flash a custom recovery file using TWRP or ClockworkMod Recovery to restore your apps all at once.

I took the latest version of Titanium Backup for a spin this morning, and it works exactly as promised.

Once you’ve backed up some of your apps, just go to the batch jobs section, choose the option to create an update.zip file from the Recovery Mode area, and choose the apps you want to include. It’s that simple.

After that’s done you can flash the update from a custom recovery. When the installation is complete your phone or tablet will automatically reboot and Titanium Backup will finish restoring your data without any user intervention required.

There’s on catch: I tried using TWRP to queue up three things: a CyanogenMod 10 ROM, a Google Apps package, and my Titanium Backup update.zip file. When my tablet rebooted, the new apps weren’t loaded.

I had to reboot and install the update.zip again before it restored my apps and settings. So you may want to install your custom ROM first, reboot into the operating system, and then install your zip file with your backed up apps.

Titanium Backup is available as a free download from the Google Play Store. A Pro license is also available if you want additional features such as batch verification, the ability to backup SMS messages, create multiple backups for the same app, or create a synchronization schedule to save your backups to Dropbox, Box, or Google Drive.

In case it wasn’t already clear, Titanium Backup only works on rooted devices.