Your phone is ringing, but it’s tucked away in you bag and you don’t want to go find it. No problem. You can take the call on you fingertip. Well, maybe.

The TipTalk is an upcoming product that you wear on your wrist as a watch or bracelet. It pairs with you smartphone over Bluetooth and when you want to make or take a call you can hold your finger to your ear and a vibration motor on the wristband will send audio through your bones all the way to the fingertip in you ear.

Basically your hand and finger will vibrate and send along the vibrations to your ear in a way that allows you to hear. At least that’s the idea. 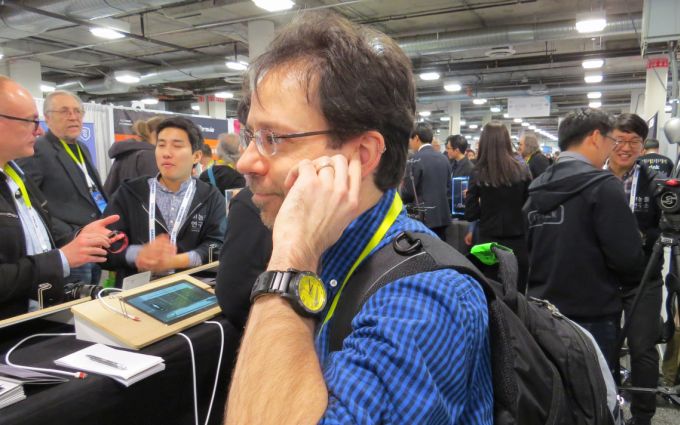 A team of former Samsung employees developed the idea for TipTalk and they plan to launch a crowdfunding campaign later this year to raise the money to bring the product to market.

They’re showing off a couple of prototypes at CES this week, and when I strapped one to my wrist and held my finger against my ear to listen to some audio… I heard nothing. I could feel the strap vibrating against my wrist, but it wasn’t positioned in a way to let the bone conduction to work well.

So a TipTalk representative move the wristband so it was touching the back of my hand, and I was able to hear some muffled talking. We were in a really loud room, so it’s possible that I would have been able to hear better in a different setting.

I was also using a prototype, not a finished product. It’s possible performance could be improved by the time the TipTalk is ready to ship to customers.

The device features Bluetooth Low Energy, a 180 mAh battery, and up to 7 days of battery life on standby or up to 6 hours of talk time. It can be charged with a micro USB cable, and features a microphone that should pick up your voice when you’re talking on a call. But since the audio is only being transmitted through your body, there’s no speaker and no chance of anyone else overhearing your call… well, except for the part where they can hear what you’re saying.

The wrist strap also includes an accelerometer, gyroscrope, and magnetometer for activity tracking.

The TipTalk will work with 18mm through 24mm watch straps and it supports Android 4.4 and later and iOS 5 and later.