Once upon a time operating systems shipped on a stack of 1.4MP floppy disks. These days most come on DVDs because the installer files can’t fit on 640MB CDs. And then there’s Tiny Core Linux. 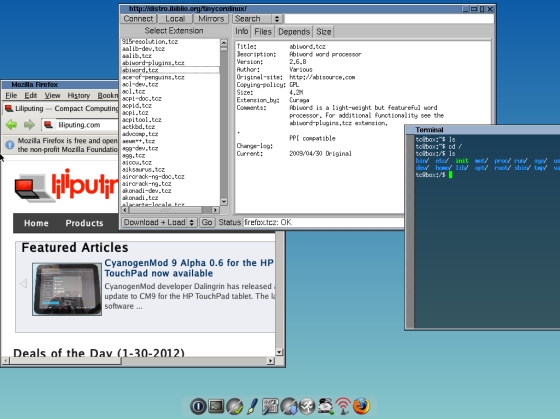 Tiny Core is a light-weight Linux distribution focused on providing a fast, small, but usable operating system. TinyCore uses just 12MB of disk space and can be booted from a USB flash drive or a CD.

Despite its small size, Tiny Core still includes a graphics user interface, a few apps, and an app manager that allows you download software including Firefox, AbiWord, or even GIMP and LibreOffice (if you decide you don’t really care about file size that much anyway).

If you don’t need the GUI, there’s a command-line only version that’s just 8MB.

With the launch of Tiny Core 4.2 earlier this month the developers also released a 64MB CorePlus version which includes a choice of window managers and other extensions that make it possible to customize the user experience and add features.

Tiny Core isn’t the prettiest Linux-based operating system around; it’s not necessarily the easiest to configure; and it isn’t designed to run some of the software you’d find in more powerful Linux distributions. But it’s still impressive just how much the Tiny Core team can pack into 64MB or less.

6 replies on “Tiny Core Linux 4.2 is a complete operating system in 64MB or less”