Chinese networking company Ruijie Networks has unveiled a mini desktop computer that looks like a slightly chunky Intel NUC… but it’s not powered by an Intel processor (or an AMD one).

Instead, the RG-CT7800 mini PC houses a Zhaoxin KX-U6780A processor. That’s a recently released x86 chip, which means it should be compatible with most Windows or GNU/Linux software… although it scores much lower on benchmark tests than similar chips from AMD and Intel. 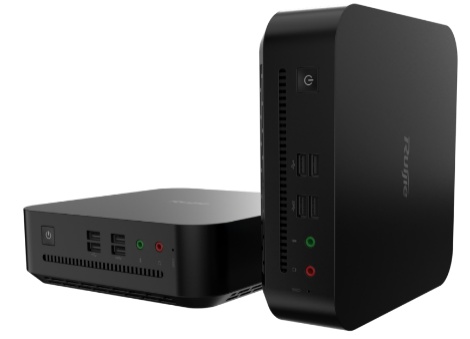 Zhaoxin is a Chinese chip maker that’s a partnership between VIA Technologies and the government of Shanghai, and the company has been making x86 processors for several years. While the company is still playing catch up to industry leaders AMD and Intel, it has made big strides in a fairly short amount of time.

Ruijie’s mini PC, meanwhile, packs that processor into a 2.4 liter chassis along with 8GB of RAM, a 256GB SSD, mic and headphone jacks, and a GNU/Linux-based operating system called Unity OS, or UOS.

The computer looks like something you could use in a home office or as a home theater PC, but it looks like it’s being positioned as a “desktop terminal” for office use.

While it’s unlikely you’ll be able to buy this mini PC or the chip that powers it outside of China anytime soon, the Chinese government has been pushing for homegrown technologies that could be used domestically. So it’s notable that the RG-CT7800 is a computer built by a Chinese company that uses a processor from another Chinese company and an operating system from yet another.

via Tom’s Hardware, cnTechPost, and qq