The Samsung Galaxy Fold is a premium smartphone that works as a small tablet when the flexible OLED display is unfolded, and as a pocket-sized phone when it’s folded in half.

The company has sold fewer than a million units so far, but Samsung is reportedly already working on its next foldable phone — a clamshell-style phone that folds in half to take up less space when it’s in your pocket. You know, like the new Motorola Razr.

Samsung has yet to officially confirm its developing a clamshell foldable. But now we know what it might look like — thanks to a set of photos posted to Chinese social network Weibo. 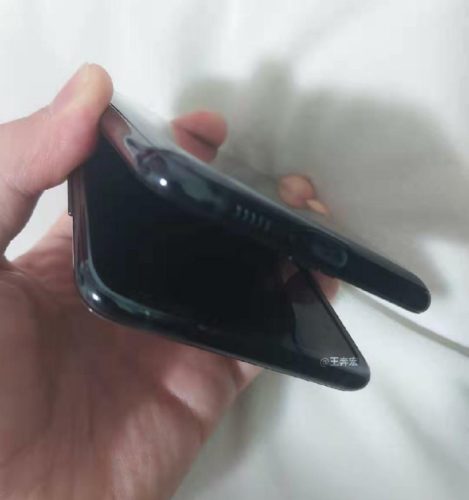 As expected, the device looks like a smartphone when unfolded, albeit one with a rather tall display (or wide if you flip the phone 90 degrees for use in landscape mode).

There’s single Infinity-O style cut-out near the top of the display for a selfie camera, and the bezel that surrounds the display seems to be about the same size on the top, bottom, and sides (the bezel’s on the chunky side).

The hinge mechanism appears to be similar to the one used for the Samsung Galaxy Fold. It’s just placed in a position that allows you to fold the phone from top to bottom rather than from left to right.

And when the screen is folded, you can see a set of dual cameras and an LED flash which would both be on the back of the phone when it’s opened. There also appears to be a small display next to the camera that could let you see the time, date, and other notifications without opening the phone.

There’s no official word on how much the phone will cost or when it will be available (or even if this thing is real)  — but rumor has it that Samsung could announce the phone alongside the Galaxy S11 on February 18th and sell it for around $1000 (or about half the price of the Galaxy Fold).