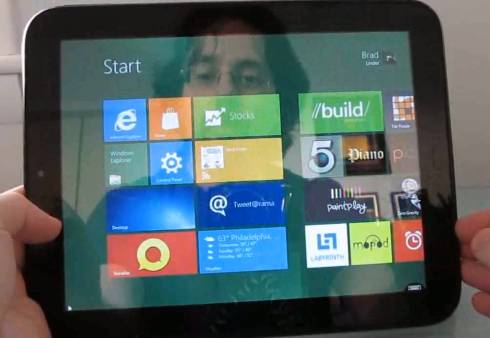 Windows 8 will be the first full version of Windows to support ARM-based processors as well as x86 chips. It’s not yet clear what the minimum specifications will be, or if you’ll be able to easily load Windows 8 on an existing ARM-based tablet such as the Apple iPad, Motorola XOOM, or HP TouchPad. But now that HP has discontinued the TouchPad (and sold off remaining inventory for prices as low as $99), there’s a lot of interest in installing alternate operating systems on the tablet.

We’ve already seen what Ubuntu Linux looks like on the HP TouchPad, and the developers at CyanognMod are working hard to port Android to run on the tablet.

Now YouTube user fireworks368 has posted a video which gives a pretty good idea of what Windows 8 would look like on the tablet. There’s currently no way to actually install Windows 8 on an ARM-based device (unless you work for Microsoft or one of its partners), because the developer preview of the operating system that was released recently only support x86 chips.

But fireworks368 installed Windows 8 on an older laptop computer then used the recently released SplashTop HD app for webOS to remotely login to the computer.

Update: It looked like so much fun I had to try it for myself by installing SplashTop on my TouchPad and on my Asus Eee PC 1000H netbook which is already running the Windows 8 Developer Preview. You can find the original video from fireworks368 at the bottom of this post.

The results are pretty interesting. The Windows 8 start screen looks great on the tablet, and you can use your fingers to scroll and click. You don’t get the Windows 8 keyboard or utilities when using SplashTop this way though — instead you use the webOS keyboard to type.

Unfortunately everything everything is a little sluggish for a couple of reasons. First, Windows 8 is running on older hardware. Second, since it’s not running on a tablet, Windows 8 expects keyboard and mouse input. And third, there’s some lag associated with the remote desktop app since the tablet and computer are communicating over the internet.

Hopefully Windows 8 will be much more responsive if and when it becomes possible to actually install it on tablets like the HP TouchPad.

Still, until Microsoft releases Windows 8 for ARM, this is about as close as anyone’s going to get to running Microsoft’s next-generation operating system on an HP TouchPad — or any ARM-based tablet.