This summer Microsoft will roll out a preview build of Windows 8.1, bringing new features and design tweaks to the Windows 8 and Windows RT operating systems. The company started showing off some of the new features recently, and now Microsoft has put together a demo video showing what Windows 8.1 looks like.

It’s interesting to note that all of the major changes Microsoft is focusing on affect the new “Metro” or “Modern” user interface that launched with Windows 8 rather than the traditional desktop view which has been around for decades.

We do know there’ll be a new Start Button in the Windows 8.1 desktop, but it’ll just dump you back to the Start Screen instead of bringing up a classic Start Menu. 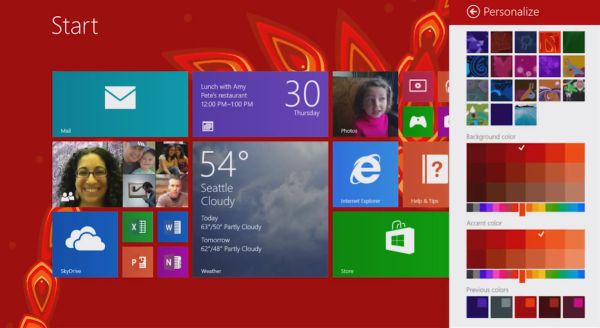 That makes sense, since Modern elements are new, play well with new touchscreen devices, and offer room for improvement. But the vast majority of Windows apps are still designed to run in desktop mode, which means that some Windows users will probably never take advantage of the new features Microsoft is pushing.

That’s kind of a shame — because one of the big stories coming out of Computex this year is the growing number of Windows computers featuring ultra-high-resolution displays. While a notebook with a 13 inch, 3200 x 1800 pixel display might sound like a good idea, most old-school Windows desktop apps aren’t designed to play well with pixel densities that high. Modern apps are.

It’d be nice to see Microsoft bring solutions to the table that will help legacy apps work better on high resolution displays. But for now, I suppose it’s nice to see that the company’s tweaking the UI of its user interface that’s already designed for high resolution screens.