But he’s also taken the time to share a few photos with us, so we can get a better look at what the little computers look like. 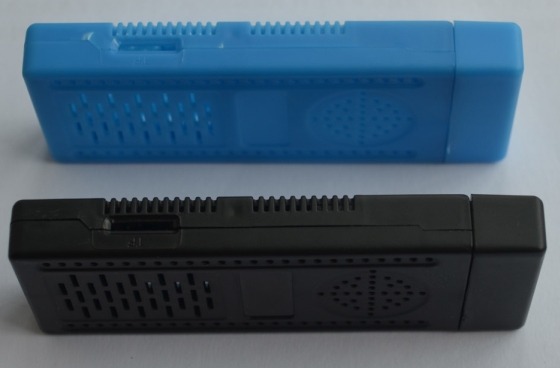 The mini PC is the size of a large USB flash drive — if a flash drive had a dual core CPU, 4GB of storage, and 1GB of RAM, as well as a microSD card slot, full and micro-sized USB ports, 802.11n WiFi, and an HDMI connector.

The little computer runs Google Android 4.0 and it’s designed to be plugged directly into the HDMI port on a TV. You can hook up a mouse and/or keyboard to navigate through the Android interface.

There case is pretty much covered with vents, which should help keep the little computer from overheating.

Botes also included a few photos of the retail packaging and images of what the mini PC looks like when you remove its plastic shell if you want to go for that Raspberry Pi-esque look.

Reno Botes isn’t the only one offering this sort of product. This week US retailer Oval Elephant started taking pre-orders for an identical mini PC for $90. It’s expected to start shipping in September.

Meanwhile, a company called Minix plans to launch a similar device called the Minix NEO G4 soon. Like the other two mini PCs, it features a Rockchip RK3066 dual core processor. But the Neo G4 comes with 8GB of storage instead of 4GB. The case design is also a little different.