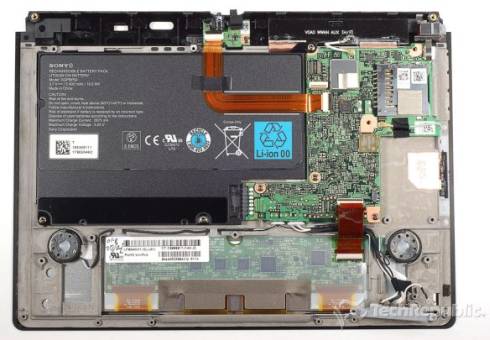 The Sony Tablet S is an Android tablet with a 9.4 inch display, an NVIDIA Tegra 2 dual core processor, and an unusual wedge-shaped design. It’s been on sale in the US since last week, so it was just a matter of time before someone cracked the tablet open to see what makes it tick.

The folks at TechRepublic did the job this time around, and they’ve posted a series of photos to show what the tablet’s insides look like.

While Android tablets aren’t generally meant to be opened up the way laptops are, it turns out that all you need to do is remove two screws to open up the Sony Tablet S. The 5000mAh battery is relatively simple to replace — assuming you can find a spare. And while Sony is offering a WiFi-only model at the moment, there’s clearly a space for a 3G or 4G mobile broadband card. Ambitious hackers might even be able to add their own.

You can find more details about the tablet’s internal components including descriptions of all the different chips found inside the case at TechRepublic.