Rhombus Tech has been working on a computer module featuring a low power ARM-based processor which can be slotted into a laptop, tablet, or other computer case. The idea is to produce a low-cost computer platform that supports open source software and hardware designs.

Now the first photo of a prototype is available. What you’re looking at is a PCMCIA card-sized device which has the guts of a fully functional computer, including a a processor, memory, and input and output. 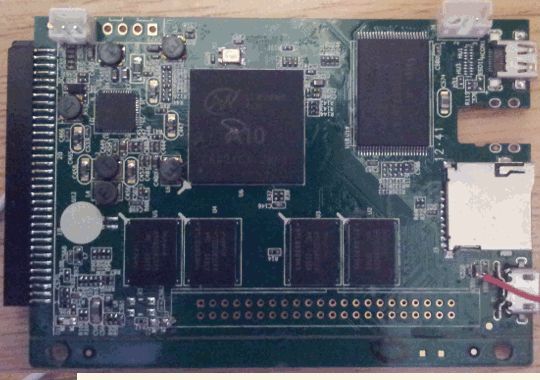 The device is called an A10 EOMA-68 and it features an Allwinner A10 single core ARM Cortex-A8 processor. That’s the same chip used in low cost devices such as the MK802 or Mele A1000.

But the A10 EOMA-68 is more versatile than those devices, since it has a 68-pin PCMCIA connector and is basically designed to be slotted into a variety of different shells to act as the brains of a computer. For example, there’s already a reference design for a laptop based on an EOMA-68 module.

While the Allwinner A10 isn’t the most powerful ARM-based processor around, it’s inexpensive and developers have demonstrated that it can handle Ubuntu and other full-fledged desktop Linux operating systems as well as Google Android.

Allwinner is also developing new, faster chips including the Allwinner A20, which is a dual-core processor that’s expected to be pin-to-pin compatible with the A10. In other words, Rhombus Tech could use the A20 chip in future versions of the EOMA-68 module by making tiny changes to the design.