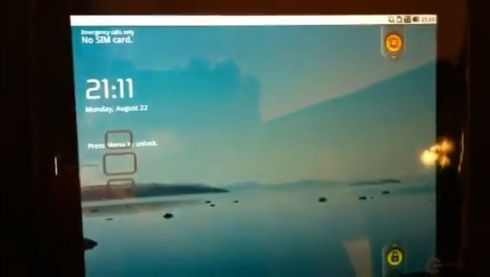 Now that HP has discontinued the HP TouchPad tablet (and sold off most of the remaining inventory at fire sale prices), hackers are trying to figure out how to port Google Android and other operating systems to run on the tablet. Sure, webOS is nice and all, but there’s no guarantee that HP will continue to support the operating system.

There’s already more than $2000 worth of prize money for the first person or team to port Android to the tablet — but it looks like developers may not have to start from scratch. A few days ago one guy bought a cheap TouchPad from Best Buy and noticed that it wasn’t running webOS — it was already running Google Android 2.2 Froyo.

While some folks are convinced this is a hoax, there’s mounting evidence that it’s the real deal. And by evidence, I mean the tablet owner’s colleague keeps posting videos to YouTube which certainly seem to show the tablet running Froyo.

It’s not clear exactly how this happened. Perhaps someone at Qualcomm loaded Android for testing purposes and accidentally released that tablet into the wild. Maybe it was someone at HP or the OEM that’s actually manufacturing the tablet. Or maybe it is all a hoax — but even if it is, it provides a good look at what Android would look like on a TouchPad tablet.

It looks like the plan for now is to send the tablet to one of the developers at Android Central so they can inspect the software and try to figure out how to install Android on other tablets.

Update: The system dump has been released, which should help developers working to port Android to the TouchPad.