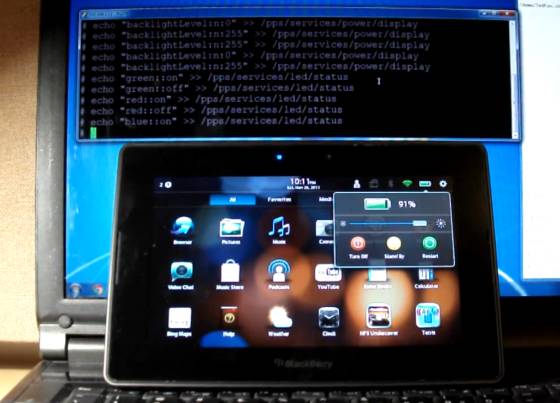 A group of three independent developers plan to release a tool for rooting the BlackBerry PlayBook within the next week or so. Yesterday we got a first look at a PlayBook that had been rooted with his DingleBerry tool with an Apple-themed background. Now developer Chris Wade has posted a video of a rooted PlayBook in action.

One of the things you can do on a rooted PlayBook is stream video from Hulu.com. The online video site blocks streaming from most mobile devices including the BlackBerry Tablet.

I suspect that this trick won’t last long. If enough people root their PlayBooks and starting visiting the Hulu website, the company will probably catch on and block video streaming again.

But it does demonstrate one of the reasons you might want to root a PlayBook. Rooting the device gives you access to escalated file permissions and allows you to make system-level changes to the device.

The bootloader is still locked, which means that you won’t be replacing BlackBerry Tablet OS with Android, Ubuntu, or another operating system anytime soon. But Dingleberry will make it possible to access features which aren’t available today, and could open the door for third party apps that require access to some of those features and settings.

You can also apparently install the Android Market on a rooted PlayBook so that you can install Android apps directly without using the official BlackBerry tools or BlackBerry App World.