Once upon a time Panasonic had big plans to launch a small game console. It would have been called The Jungle and it would have been a clamshell-style handheld device with a screen that folds down over a QWERTY keyboard, D-pad, a touchpad and a smaller, secondary display.

Panasonic first revealed it was working on The Jungle in 2010, but scrapped the project less than half a year later. It looks like the company did produce some prototypes though, because pyra-handheld forum member AVahne managed to get one, and there are pictures to prove it. 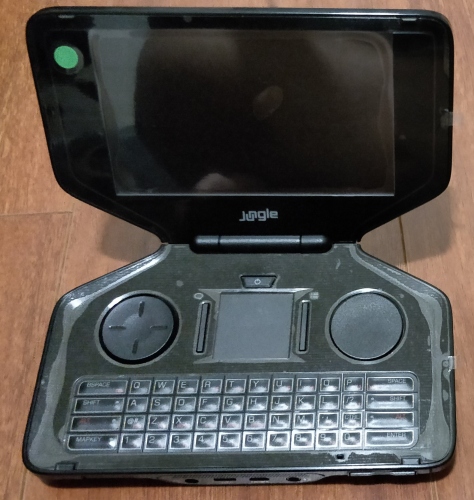 While detailed specs aren’t available, the handheld game system seems to have a 5 inch display and features a range of ports includign a micro USB port, a micro HDMI port, a headphone jack, and a microSD card reader.

In addition to the touchpad and direction pad, there are shoulder buttons. But there are no A, B, X, or Y buttons or analog sticks. It’s unclear if the idea was to emulate those features using the touchpad, if the omission was specific to this prototype, or if there’s something else going on.

The Jungle was designed run massively multiplayer online role playing games (MMORPGs), allowing users to play the PC-like games on the go, assuming they had an internet connection.

While detailed specs were never released, it was expected to feature an ARM-based processor and a Linux-based operating system. AVahne hasn’t been able to confirm those details yet and it doesn’t seem like the prototype can actually do very much at this point.

Apparently the keyboard and button layout isn’t all that pleasant though… with more recent handheld game systems like the GPD Win and the NVIDIA Shield Handheld reportedly offering a better experience.

You can find more pictures at the pyra-handhed forum.