Apple’s iPads and MacBooks have the same processors these days, and you can even run iOS apps on a Mac… but you cannot run Mac apps on an iPad or iPhone because Apple continues to draw a distinction between Macs (laptops and desktops without touchscreens) and iOS devices (touch-first tablets and phones).

But all of that only applies to Apple-made hardware. Folks who build Hackintoshes (DIY PCs that run macOS) have other ideas. And one of those folks has even made a handheld computer that runs macOS Big Sur, the latest version of Apple’s laptop and desktop operating system. 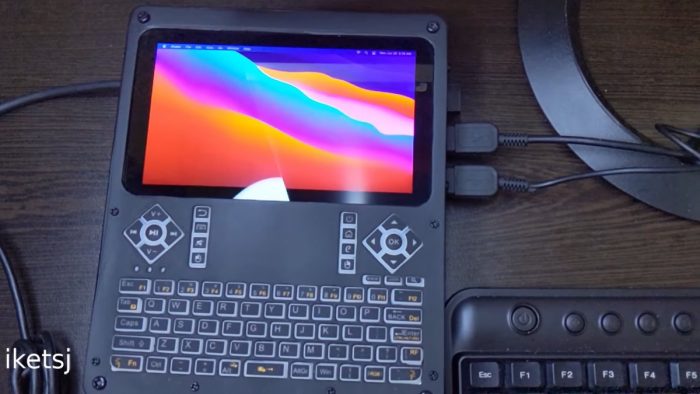 The handheld is powered by a LattePanda Alpha single-board computer with an Intel Core m3-8100Y processor and 8GB of RAM plus an SSD, wireless card, an LCD display, and a battery that’s been modified to fit inside a 3D-printed case.

The developer also added a physical keyboard and touchpad and equipped the system with a custom printed circuit board to connect all the hardware and allow everything to interact properly.

It also supports video output to an external display, allowing you to use the little computer either as a handheld or a tiny desktop computer.

You can find more information about the hardware, plus the assembly steps in the builder’s YouTube video… as well as the developers regrets for things that could have gone better in this DIY build.

Folks have been building Hackintoshes for years, making it possible to use Apple’s operating system on hardware that may be cheaper, more powerful, or just generally different than what you’d get if you bought the closest equivalent Mac.

But now that Apple has begun shipping Macs with its own processors and started down a path that will likely see the end of support for Intel chips in the coming years, it’s unclear what the future of the Hackintosh scene will be.

That said, if folks can disassemble a Nintendo Wii and convert it into a handheld game console, I’m sure someone will figure out ways to modify Macs to their liking… even if the operating system itself won’t necessarily run on third-party hardware.