There are a growing number of options for folks looking for a handheld gaming computer. But why buy a Steam Deck, AYA Neo, GPD Win, or AYN Loki when you could make your own?

Redditor SerMumble decided to go the latter route with a DIY Cyberdeck meant for gaming on the go. It combines a motherboard meant for mini PCs with a 9 inch display, detachable game controllers, batteries, and a 3D printed case, among other components. 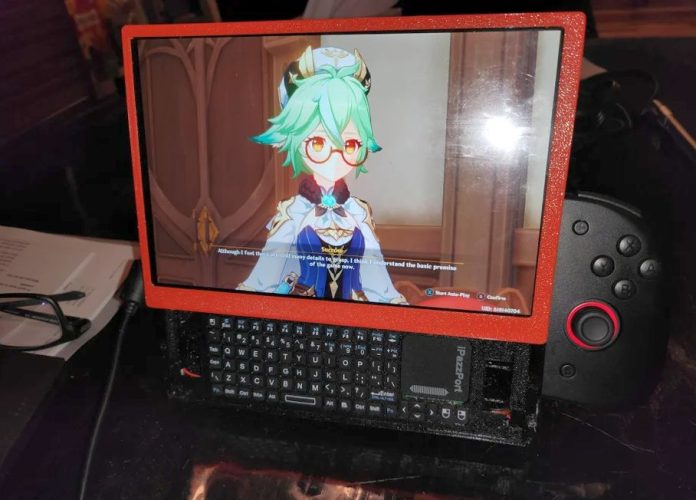 The brains of the operation is the ASRock 4×4-4800 motherboard, which is a 4.09″ x 4.02″ board with an AMD Ryen 7 4800U 8-core, 16-thread processor featuring Radeon Vega 7 graphics. While the motherboard is made for compact desktop computers, the processor is designed for laptops and is therefore energy efficient enough for a battery-powered computer.

SerMumble notes that the system is powered by a custom battery pack with four to eight 18650 Lithium Ion batteries and gets anywhere from 1 to 5.5 hours of battery life, depending on usage (some games work best with the processor’s TDP set to 35 watts, while others run well at 10-15 watts).

In addition to the mainboard and battery, the DIY handheld features a 9 inch IPS LCD touchscreen display, a thumb keyboard that’s been grafted onto the system, and a third-party Nintendo Switch wireless controller that can be connected to the sides of the device.

The system features 32GB of RAM and as 1TB SSD, but those specs should be customizable, since the ASRock board features dual 260-pin SODIMM slots with support for up to 64GB of DDR4-3200 memory and M.2 slots for storage and/or wireless connectors.

You should also be able to add a number of accessories, since the board also has plus plenty of ports including:

ASRock also offers similar boards with Ryzen 5000U series processors or Intel chips, so the design is theoretically rather versatile.

You can find more details and additional pictures at /r/cyberDeck.