One YouTuber decided not to wait. Instead he built his own portable gaming computer by attaching a game controller, display, and battery to a Sapphire AMD FS-FP5V motherboard with the same Ryzen processor.

It’s so ugly it’s kind of beautiful. And it kind of gives us an idea of what level of performance we might see from the upcoming mobile computers from GPD and Smach. 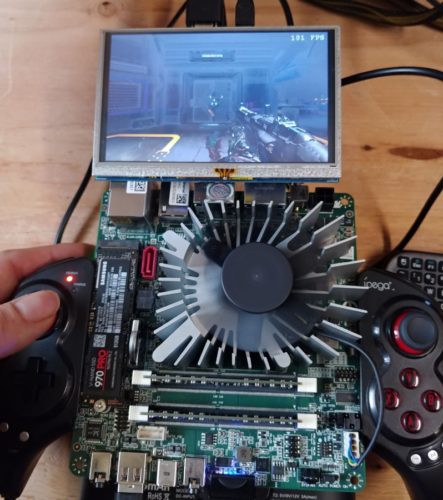 The video shows the 2016 version of Doom running at high frame rates, albeit on a low-resolution, 800 x 480 pixel display.

The system has been configured with 16GB of RAM and a 512GB PCIe NVMe solid state drive and the processor is set to run at 12 watts. The whole thing is hooked up to a 92.5 Wh USB battery pack and gets pretty lousy battery life… but I’d take any battery life estimates with a grain of salt.

Since the computer is running from a USB battery pack rather than a battery that’s integrated into the system, my best guess is that the computer thinks its plugged into a wall outlet rather than running off of battery power. So it’s not taking any steps to optimize power efficiency.

Hopefully handheld gaming PCs that ship with this processor will get somewhat better battery life due to hardware and software optimizations.

Still, Smach is only promising 2-7 hours of battery life for the Smach Z, so it does seem like PC makers are aware that the Ryzen Embedded processor can be a bit of a power hog when running some games.

If you want to try building your own Ryzen Embedded handheld… good luck. Sapphire doesn’t list the retail price on its website, but about a year ago it was selling for about $462 and up… including shipping. Alternately, you could try pre-ordering an UDOO Bolt with the same processor for $418 and up, but it might take more than a month to ship.