Samsung has already confirmed plans to unveil an 8 inch Galaxy Note at Mobile World Congress in February. Now we may have an idea what that tablet will look like.

Twitter user @Claisifatearg has posted a photo allegedly showing a flyer for the upcoming tablet, complete with pictures of the front and back of the device. 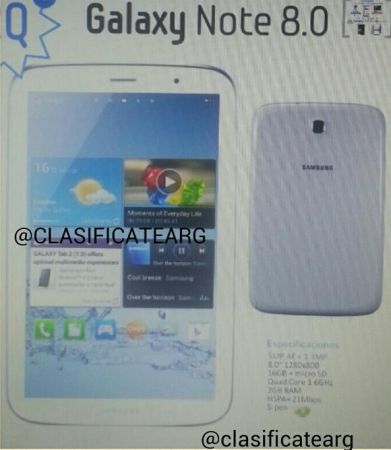 If the picture is real, it looks like the Galaxy Note 8.0 may share more DNA with its 5.5 inch smartphone sibling than with the larger Galaxy Note 10.1 tablet. It kind of looks like what you’d get if you just blew up the Galaxy Note 2 (which I suppose could also be an indication that the pictures are ‘shopped – as is the fact that ClasificateArg’s Twitter account looks pretty anemic).

The 8 inch tablet is expected to have a 1280 x 800 pixel display, 1.6 GHz quad-core processor, and 2GB of RAM. Like other members of the Note family, it will have an S-Pen which you can use to write or draw on the screen with pressure-sensitive input, as well as S-Pen software that lets you jot notes on screenshots, preview videos while scrubbing, and perform other pen-friendly tricks.

Samsung will apparently ship the Galaxy note 8 with Android 4.2 software, and it’s expected to be available with up to 32GB of storage, a microSD card slot, WiFI, Bluetooth, and at least an option for HSPA+ connectivity.

5 replies on “This could be what the Samsung Galaxy note 8.0 looks like”