Smartphones with folding displays are all the rage these days, but it looks like different phone makers may be different approaches. Royole’s FlexPai smartphone folds in half so that part of the phone’s 7.8 inch display becomes a 4.5 inch screen. Samsung’s upcoming foldable will bend the other way… so that the tablet-sized screen is on the inside and you’ll actually use a secondary, external display when the phone’s folded in half.

Meanwhile it looks like Motorola’s new folding phone may fold more like an old-school flip phone. Rather than a smartphone that unfolds to become a tablet-sized device, imagine a phone that bends in half to become… a smaller phone. 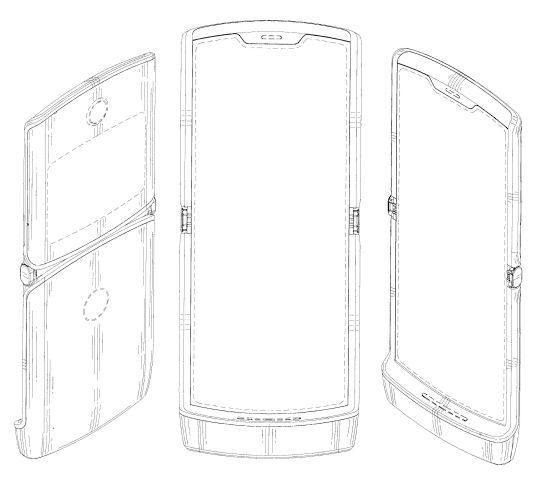 Last week the Wall Street Journal reported that Motorola was planning to revive its Razr brand to launch a new phone with a foldable display and a price tag that could be as high as $1,500.

Now the folks at 91mobiles have uncovered a Motorola patent filing that shows a phone with a flexible display, a hinge in the middle, and a two-panel back with a small display on the upper section and what appears to be a fingerprint sensor on the bottom.

When the phone is open, you’d be able to interact with it like a normal touchscreen phone. When it’s closed you’d presumably be able to see incoming text messages, phone call alerts, and other notifications on the secondary screen.

I typically don’t place too much stock in patent filings because device makers have a habit of applying for patents on all sort of technology that never sees the light of day. But given that Motorola is expected to launch a Razr-branded folding phone, the fact that the Lenovo-owned company received a patent on just such a device last year at least raises the possibility that  the finished product could look something like the images in the patent documents.

In other words, even if Motorola does release a phone that looks something like the one shown in the patent application, there’s no guarantee the primary or secondary display, the fingerprint sensor, or the camera location in the images will be accurate.