Rumor has it that Samsung is working on a new premium tablet to replace the aging Galaxy Tab S3. A few days ago we learned that the upcoming Samsung Galaxy Tab S4 might support the company’s DeX platform, allowing you to connect an external display and use the tablet like a desktop PC. But we still didn’t know what the new tablet would look like.

Now we do, thanks to Android Headlines. 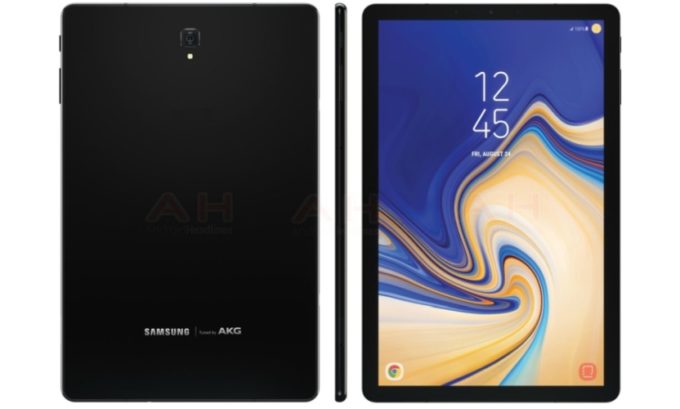 The website has published a leaked set of images that allegedly show the front, back, and right side of the Galaxy Tab S4.

On the back there’s a Samsung logo with the language “Tuned by AKG” next to it, suggesting that Samsung partnered with the audio company on the tablet’s speaker system.

The front of the tablet shows a new design: there’s no home button or visible fingerprint sensor, and the top, side, and bottom bezels all seem to be the same size. Earlier Samsung tablets tended to have larger top and bottom bezels, with the Samsung logo above the screen and a home button below.

It’s unclear if Samsung’s new tablet has an in-display fingerprint reader, uses face recognition instead of fingerprint recognition, or includes some other sort of secure login technology to make up for the missing fingerprint/home button.

Detailed specs aren’t official yet, but Android Headlines says we can probably expect a Qualcomm Snapdragon 835 processor, 4GB of RAM, 64GB of storage, a 7.300 mAh battery, a 13MP rear camera, and an 8MP front camera.

Update: Here are a few more pictures, showing the keyboard cover and pen, courtesy of @evleaks: