Samsung is holding an event on February 20th where the company is expected to unveil the Galaxy S10 and S10+ smartphones, among other things.

Thanks to a few recent Samsung announcements, we’re already pretty sure that the phones will ship with an Exynos 9820 processor in some market (and most likely a Snapdragon 855 chip in others), and they may be available with up to 1TB of UFS 2.1 storage.

Now the folks at 91mobiles claim to have image that shows what the Galaxy S10+ will look like.

Update: And WinFuture also has pictures of the front and back of both the Galaxy S10+ and GalaxyS10. And Slashleaks has some more. 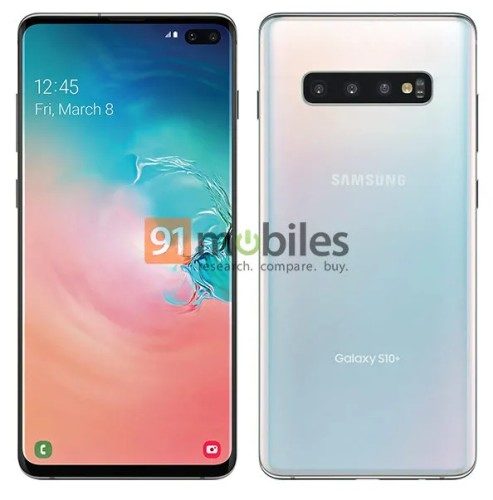 What we’re looking at seems to be a phone with three rear cameras, two front-cameras, and slim bezels around all sides of the screen. Those front-facing cameras appear to hang out in a hole in the upper right corner of the screen, in what Samsung calls an “Infinity O” design.

There’s no visible fingerprint sensor on the front or back of the phone, which is in line with rumors that have suggested the phone will have an in-display fingerprint sensor. That’s a feature that’s become increasingly common on Chinese smartphones, but which hasn’t really been widely used in phones sold in the US and Europe yet. The phone will also likely have some sort of face unlock and/or Iris scanning capabilities for folks who would rather use those.

One trend Samsung doesn’t seem ready to adopt is the move toward button-free phones. Not only does the Galaxy S10+ have volume and power buttons, but there seems to be a Bixby button as well.

Update: The images posted to Slashleaks and WinFuture show that the Galaxy S10 looks a lot like its bigger sibling, but it’s smaller and has only a single front camera instead of two.