Google might introduce a 10 inch Nexus tablet on Monday. We’ve seen plenty of evidence so far. Now the folks at BriefMobile claim to have seen a lot more… and they’ve got photos to kind of prove it. 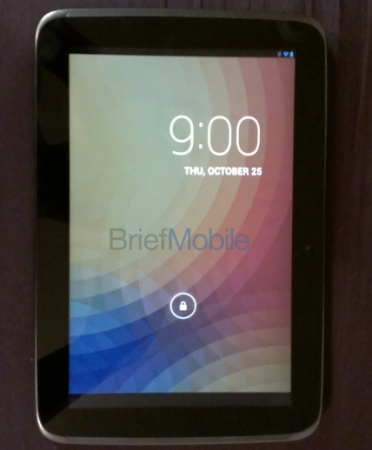 The site has posted a series of pictures of a tablet that appears to be a Samsung-built 10 inch tablet that will be sold as a Google Nexus device.

It will reportedly have a 5MP rear camera, a front-facing camera, WiFi, Bluetooth, and NFC. The Nexus 10 is also expected to run Google Android 4.2.

Like the Google Nexus 7, the Nexus 10 apparently doesn’t have a microSD card slot. So if you want more than 16GB of storage space, you’ll either need to hope Google and Samsung offer models with higher capacity or rely heavily on cloud-based storage solutions.

There’s still no word on how much the tablet will cost.

You can find more pictures at BriefMobile, including a shot of the back which looks an awful lot like the drawings from the leaked user manual we saw earlier.

6 replies on “This could be the Google Nexus 10 tablet”