Unless Google decides to shake things up this year, it’ll probably be a few months before the company unveils its next-gen Pixel smartphone lineup. But the rumor/leak mill has already kicked into high gear, and now MySmartPrice and @OnLeaks may have given us a good look at the upcoming Pixel 3 and Pixel 3 XL smartphones.

While detailed specs, prices, and other information will likely have to wait a while, the two have teamed up to create a set of renderings based on CAD files that are said to represent the design of Google’s next smartphones. 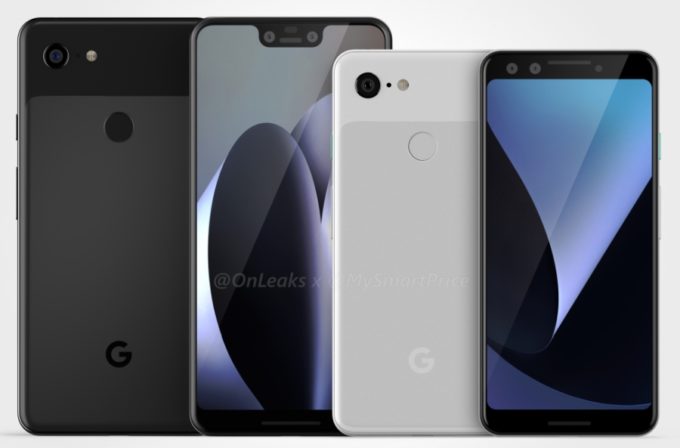 Like earlier Pixel phones, there are expected to be two sizes. But both have taller screens than their predecessors, thanks to a new wider aspect ratio and slimmer bezels.

The Pixel 3 is expected to have a 5.4 inch display and smaller top and bottom bezels than the Pixel 2. The display also seems to have rounded corners and it’s expected to feature an 18:9 (or 2:1) aspect ratio.

The Pixel 3 XL, meanwhile, is said to have a 6.2 inch phone with a 19:9 aspect ratio and a notch instead of a top bezel. That provides more screen real estate by allowing the status bar to wrap around the camera cut-out. But if you hate notches, I wouldn’t be surprised if Google allowed you to paint the status bar black: Android P is the first version of Google’s mobile operating system to have native support for notch-phones.

If the leaked CAD files are to be believed, the Pixel 3 and Pixel 3 XL will both have single cameras on the back, but dual cameras on the front. That could enable support for 3D face scanning, among other things. Or the images might just be a little inaccurate and we could be looking at an ambient light sensor next to the front camera.

There’s also a fingerprint sensor on the back of the phone.

It’s probably best to take all of these details with a grain of salt until they’re confirmed by Google. But to my mind, the smaller model still looks like the more attractive option: it’s got all the same basic features, but a more compact design. And there’s no notch to get used to.

Then again, I’m still pretty happy with my 2017 Pixel 2 and it’d take some seriously powerful new features to tempt me to upgrade before the Pixel 4 or Pixel 5 are ready to go.