Most business cards are pretty boring. Sure, they come in handy for providing someone with your contact details when you first meet. But after that they usually find their way into a trash (or recycling) bin.

But some folks take a different approach to business cards by creating something you might actually want to hold onto for a while. The ability to create relatively inexpensive printed circuit boards has led to a bunch of truly original business card-sized PCBs in recent years.

For example, there’s Seamus de Cleir’s Magic 8-Ball business card, or Corey Harding’s PCB card that displays contact info when you plug it into a computer’s USB port, open a text editor, and then touch a point on the board (if you think it’s a good idea to plug in a USB drive from a security researcher).

Inventor and musician Tim Jacobs decided to create a PCB card that’s a musical instrument… or part of one anyway. 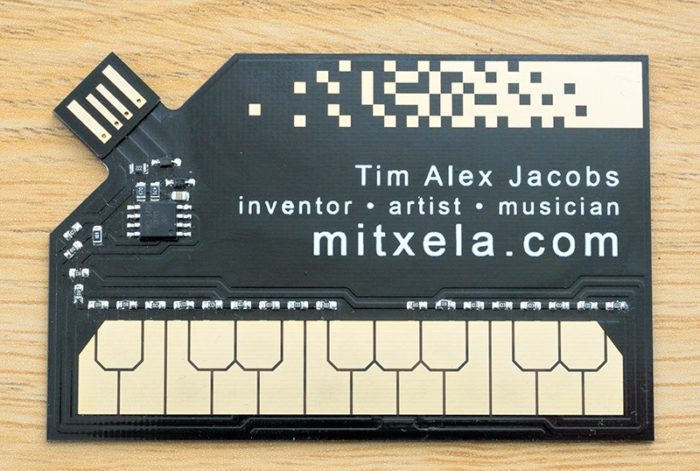 His StyloCard is a business card-sized MIDI controller inspired by the Stylophone. It doesn’t make any sound on its own, but use the USB plug in the corner to connect the StyloCard to a computer and you can use any small metal object to pick out notes on the keyboard.

The StyloCard measures 85mm x 55mm, making it about the size of a typical business card. At 1mm thick, it might be a little chunky, but it should still be small enough to fit into a wallet.

Jacobs originally designed StyloCard prototype a few years ago, but put it on the back burner while trying to think of a good way to include a stylus of some sort without driving up the cost.

As it stands, he says he was able to order a set of cards last year for about $3 per card, including the cost of shipping and the price of adding an immersion gold finish.

Since the USB connector needs to be a bit thicker than the rest of the card in order to work, each PCB actually has a second half of the USB plug attached to the top. Jacobs has to break off that piece of the card and solder the two parts together. A few other components also need to be soldered into place before the StyloCard becomes fully functional.

Is this the most practical business card solution ever? Not by a long shot. But it is one way to come up with a business card that people might not immediately throw away. And at $3 per card, you’d better hope people are at least impressed with your ingenuity.

Jacobs, by the way, is the same developer who created a Thermal paper Polaroid camera last year that uses a Raspberry Pi to capture images and then print them out onto cash register receipt-type paper.

You can find more pictures and details about the project at mitxela.com.