It’s available from AliExpress for $187 and up. 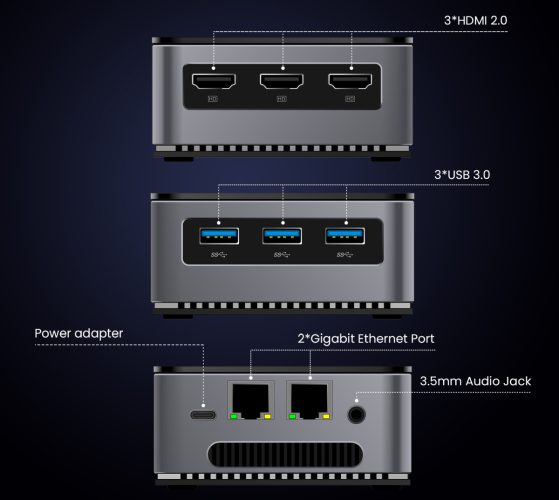 The little computer also features a USB Type-C port (for power), a 3.5mm audio jack, and an Intel AX201 wireless card with support for WiFi 6 and Bluetooth 5.2.

It has an M.2 2242 slot for user upgradeable storage, but the RAM is soldered to the mainboard and cannot be changed.

Other features include a fan for active cooling, a power button and LED status indicator light. According to the AliExpress product page, the computer supports Windows 10 or Windows 11, although it’s unclear which operating system it actually ships with.

Keep in mind that the Intel Celeron N5105 processor is a low-cost, low-power chip that’s designed for efficiency rather than bleeding edge performance. It lacks multithreading support so it’s a 4-core, 4-thread processor, for example. And its Intel UHD integrated graphics won’t offer the same level of performance you’d expect from an 11th-gen or 12th-gen Intel Core processor with Iris Xe graphics.

Intel says the chip is theoretically capable of supporting up to three displays, but the chip maker notes that “functionality, performance, and other benefits of this feature may vary depending on system configuration,” so there’s no guarantee that the SZBOX GK will do a good job of driving three displays at once.