Now it looks like the first models with Intel Celeron N5105 Jasper Lake processors have arrived. The new 2.8 inch mini PCs are available from AliExpress for around $186 and up or from Amazon for $269 and up. And the processor isn’t the only thing that’s been upgraded. 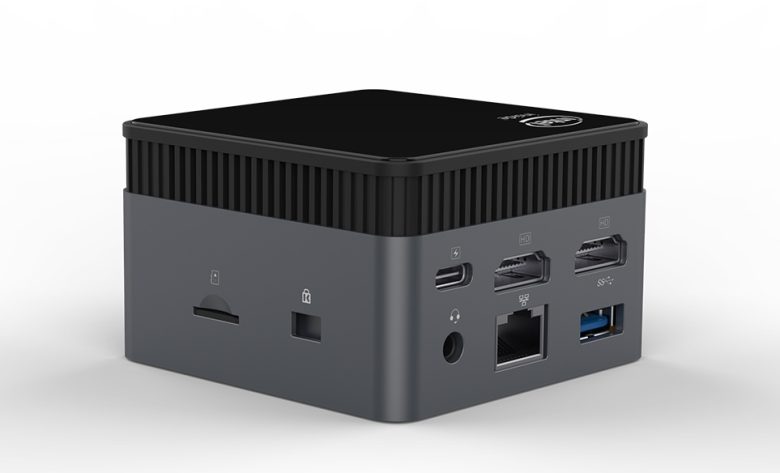 While the Celeron J4125 and N5105 chips look similar on paper, with the newer model only offering a slight increase in Turbo Boost frequencies, the Celeron N5105 is based on newer architecture and should bring a significant boost in both single-core and multi-threaded performance. It also has higher-performance graphics that should make the new model a much better option for use as a media center PC, digital signage system, or even for lightweight gaming.

That brings the selection of ports for the new 2.8″ models to:

The USB-C port is the tiny computer’s power jack, with support for a 12V/3A AC adapter. It’s unclear whether that port also supports data (USB-C docks with passthrough power do not work with the GMK NucBox or Chuwi LarkBox).

Sold under several different brand names, I’ve found a few different companies selling the new 2.8″ mini PC under the name “ZX01,” but GMK also recently began selling a model it called the GMK NucBox5. That model also has a Celeron N5105 processor and 8GB of RAM, and it has a starting price of $320 for a model with  a 256GB SSD.

Another Chinese PC maker named Kingdel has also introduced a model called the Kingdel M6S, which sells for $273 and up and features 8GB of RAM and 128GB to 1TB of storage. Kingdel’s model stands out in at least one way: it ships with Windows 11 Pro software pre-installed.

Entry-level models of the ZX01 and other 2.8″ mini PCs have as little as 64GB of solid state storage, but there are also higher-priced models are available with up to 1TB of storage.

While the Celeron N5015 processor can theoretically support up to 16GB of memory, all the versions of the 2.8″ mini PC I’ve found so far seem to have 8GB of memory which I’m pretty sure is soldered to the mainboard and not user upgradeable. But the little computer does have an M.2 2242 slot so the solid state storage should be user replaceable.