Chinese PC maker XCY specializes in small desktop computers, but the company’s latest model is its smallest yet.

The new XCY Mini PC Stick is a 5.3″ x 1.8″ x 0.6″ stick with an HDMI connector on one end, allowing you to plug the stick directly into the video input on a TV or monitor, much the same way you would plug in an Amazon Fire TV Stick, Google Chromecast, or Roku Streaming Stick.

But as the name suggests, the XCY device isn’t just a media streamer. It’s a full-fledged personal computer. In this case, one with an Intel Celeron N4100 processor, 4GB of RAM, and 128GB of storage.

The XCY Mini PC Stick is available from AliExpress for $159. 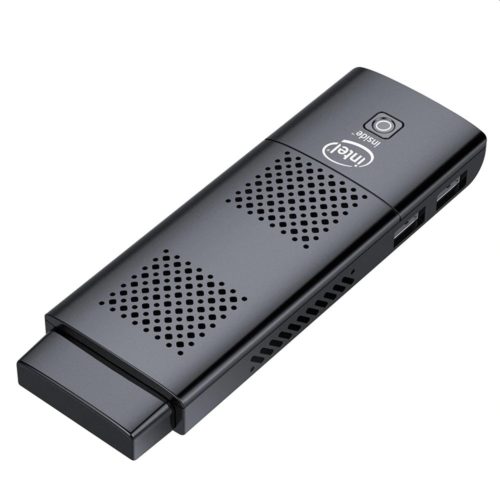 The little computer is powered by Intel’s 6-watt, quad-core processor with Intel UHD 600 graphics. It’s a chip that was released in 2017 and which uses Intel’s Atom-based Gemini Lake architecture. But it should be good enough for simple web browsing, document editing, media playback, and other simple tasks.

In addition to the HDMI 2.0 connector on one of the computer, there are two USB 3.0 ports, a microSD card reader, and a 3.5mm audio jack. XCY says the system can support 4K video output at 60 Hz, and the computer is said to be compatible with Windows 10 and Ubuntu Linux (although I can’t see why other GNU/Linux distributions wouldn’t work).

There is a small fan inside the case to keep the computer from overheating, so don’t expect completely silent operation.

XCY is hardly the company to make a PC-on-a-stick. But the form factor has been a lot less popular in the years since Intel gave up on its own Intel Compute Stick.

Earlier this year MINISFORUM introduced a few new models, but the XCY model is a little cheaper than either the MINISFORUM S40 or S41.