The Raspberry Pi Zero is a is a tiny, low-power single-board computer that sells for $5 (or $10 if you want a Pi Zero W with WiFi and Bluetooth). But the tiny computers aren’t much use without accessories — like most single-board computers, you’ll need to connect a keyboard, mouse, and power supply before you can do anything with it.

One option is to use the Raspberry Pi Zero W as a tiny desktop — but there are much better options with more powerful hardware if that’s what you plan to do.

Another is to use it as the foundation for a portable device — and one nifty new option for doing that is the SnapOnAir Raspberry Pi Zero PCB. It’s a printed circuit board designed to help you build your own handheld PC using a Raspberry Pi Zero W and a 2.8 inch LCD display (sold separately).

The PCB is available for purchase from Tindie for $10 and you can read more about the project in the developer’s Facebook group and on Twitter and github. 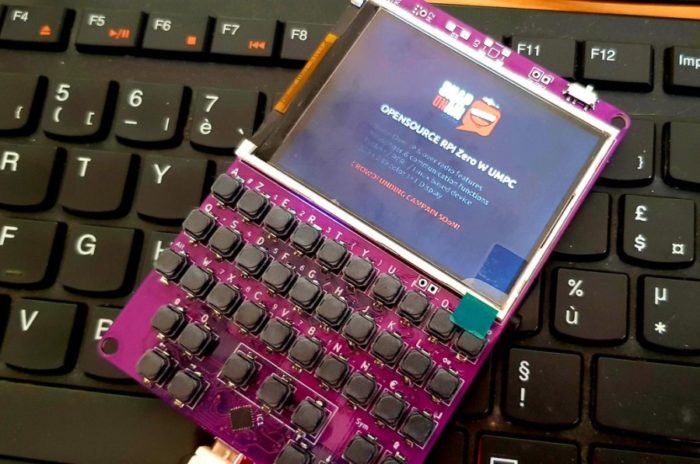 The board is designed to let you build a handheld communicator or pager-style device by attaching a Raspberry Pi Zero and a bunch of other components including a touchscreen display, an RF transceiver, a digital microphone, buzzer, USB connector, and silicon buttons for the keyboard.

Looking through recent updates, it looks like you can also connect a portable battery to make the device truly mobile… although you’ll still probably want to design a 3D printed case if you don’t want all the electronic components to be exposed to the elements (or lint in your pants pocket).

With a 1 GHz single-core processor, 512MB of RAM, and a microSD card slot for storage, the Raspberry Pi Zero isn’t exactly the most powerful mini PC around, but it’s certainly one of the cheapest to feature built-in WiFi, Bluetooth, and support for Raspberry Pi-compatible hardware and software. And it packs more than enough horsepower for the modern, open source communications device the folks at SnapOnAir have been focused on.

At this point you should just keep in mind that all the company is selling is a PCB, with a lot of assembly required to turn it into a fully functional handheld computer. So if you’re not into the DIY thing, you might want to wait and see if a fully assembled version becomes available in the future.