Opposable thumbs may have helped set humans apart from other animals… but just think how much more we could do if we had two opposable thumbs on each hand instead of one?

That’s kind of the idea behind a prosthetic thumb developed by Royal College of Art student Danielle Clode, one of the winners of the university’s annual awards competition.

While most prosthetics are designed to replace a missing limb, The Third Thumb is designed to give you an extra digit. 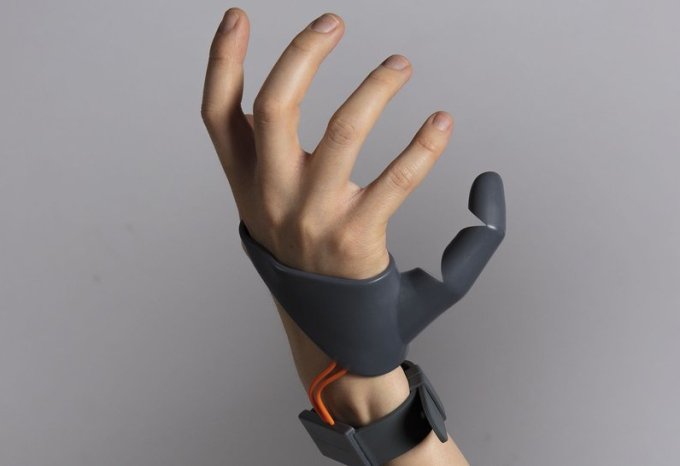 Here’s how it works: attach the 3D-printed prosthetic to your hand and it gives you an extensible thumb on the opposite side of your natural one. Motors are stuffed into a wristband that connects to the thumb. And you put pressure-sensitive controllers into your shoes, allowing you to send commands to the thumb with your feet. The signals are carried via a Bluetooth wireless connection.

Once you get the hang of using the thumb, you should be able to use it to grasp items or just about anything else you’d use your thumb for, including flicking pages in a book (or on a tablet), or even hitting hard-to-reach spots on a musical instrument.

I suspect that last one would take some serious getting used to, but Clode tells Deezen part of the reason she decided to make a device that you control with your feet is that people are already used to coordinating hand-and-foot actions when doing things like driving a car. With a bit of practice, this type of prosthetic could make it possible to play guitar or piano compositions that would otherwise be impossible for a single person to play on an analog instrument.

Of course, the prosthetic could also be used the old-fashioned way, by providing a thumb to someone who’s lost one or may never have had one at all due to a birth defect. But while I have no idea what I’d do with an extra thumb, Clode’s decision to develop her project specifically as a third thumb rather than a replacement is intriguing.

It’s unclear if the Third Thumb will ever become a real product. But as you can see in the video below, there’s a working prototype. And as one of the winners of the Royal College of Art’s contest, Clode will get £2,000 to continued development of the project.

The Third Thumb Project from Dani Clode on Vimeo.

via The Verge and Deezen