These days you can find tiny laptop computers with screens as small as 7 inches. But Paul Klinger wanted something smaller… a lot smaller. So he built his own.

The ThinkTiny is a miniature laptop computer with a 0.96 inch display and a design that’s heavily inspired by Lenovo/IBM ThinkPad style. There’s even a TrackPoint-like pointing nub.

While the device isn’t exactly a full-fledged computer (the keyboard is non-functional), you can use it to play simple games including Snake, Tetris, and Lunar Landar. 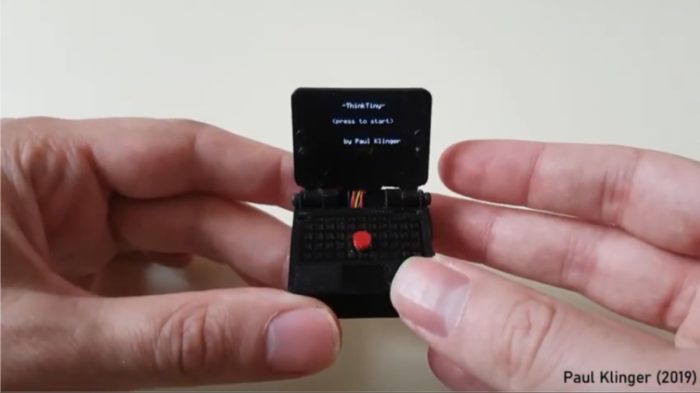 To build the ThinkTiny, Klinger created a 3D-printed case and crammed a 128 x 64 pixel OLED display, an ATtiny1614 microcontroller, a 300 mAh battery, and other components inside.

Despite choosing small components, he still had to make some modifications to fit everything into a case this small — for example, the OLED display’s printed circuit board was a bit too big, so he had to cut off the top.

You can find instructions, code, and design files for the PCB and 3D printed case at Klinger’s github page.

Oh, and this is actually Klinger’s second TnyPC — the first model was a miniature desktop PC replica with RGB lighting, a little display, and a joystick.