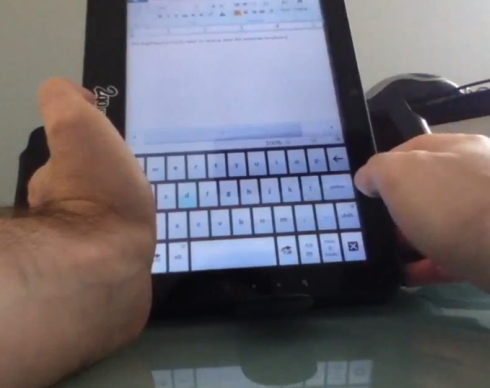 Thinix Touch is an application designed to make Windows 7 a more touch-friendly operating system. Sure, Microsoft built support for multitouch gestures into Windows 7, as well as a bigger taskbar with nice large icons that are easier to tap with your fingers. But many UI elements were simply designed for a mouse and keyboard instead of a fingertip, and Thinix Touch goes a long way toward fixing that problem… but perhaps not quite far enough.

I’ve been meaning to check out Thinix Touch for a few months, but I kept getting sidetracked. Fortunately my colleague James Kendrick posted an overview today which jogged my memory.

In some ways, Thinix is similar to Mirabyte’s FrontFace software, which I’ve previously tested. Both essentially replace the Windows 7 desktop and start menu with screens filled with large icons for launching apps, organized by category.

The Thinix icons are easy to customize: up to a point. Just hit the QuickEdit button and then tap on any icon to change it. For instance, if you’d rather have a shortcut for Firefox than Internet Explorer, just tap on the IE logo and select Firefox from the drop-down menu. Tap on any empty space to add a new app. Unfortunately, after installing the Irfanview image editor, I found the app didn’t show up in the drop-down list, so I couldn’t create an icon. That meant there was no way for me to launch the app with Thinix Touch running, since I had no access to the Windows Start Menu.

The thing I like most about Thinix Touch is the on-screen keyboard. It’s much easier to use on a device like the CTL 2goPad with a 1024 x 600 pixel display, because unlike the default Windows 7 on-screen keyboard, the Thinix Touch keyboard doesn’t try to put every possible key on the same screen. In portrait mode, it’s even easier to thumb-type using the Thinix keyboard than on some smartphone sized devices I’ve used including my iPod touch and Google Nexus One.

In landscape mode, the keyboard is pretty good, but not quite as pleasant to use as the iPad keyboard. The best thing about the keyboard is that when you pull up the on-screen keyboard, it anchors itself to the bottom of the screen and automatically resizes your running apps so that you don’t have to keep dragging the keyboard out of the way to see what you’re typing.

On the other hand, I found that the resizing feature was inconsistent. In my tests, sometimes minimizing the keyboard made the app go back to full size. Sometimes it didn’t. It also took longer than I would have liked for the keyboard to appear after tapping the keyboard icon — which may be a limitation of the Atom processor and GMA 3150 graphics on the 2goPad rather than the software itself.

You can check out my hands-on video overview below.

Update: Thanks to turn_self_off for reminding me that you can dock the Windows 7 keyboard. I gave it a quick test and discovered two things.  First, you have to navigate through the Tools menu to dock the keyboard every time you launch it. After you close the keyboard it will open in “float” mode then next time you launch it. Second, it takes up more than half the screen in landscape mode. You can see a photo showing just how ridiculous it looks after the break. 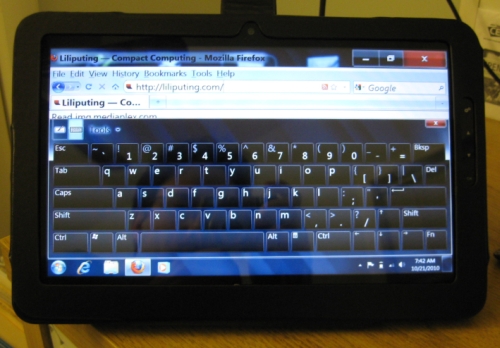