Windows 10 S is a streamlined version of Windows that only runs apps downloaded from the Windows Store. Microsoft says the operating system was designed with the education market in mind, where it will compete with Google’s Chrome OS (which is popular due to a combination of performance, security, management features and the relatively low price of many Chromebooks).

But the first device to ship with Windows 10 S is actually Microsoft’s high-priced Surface Laptop, which sells for $999 and up. And now that it’s available, some folks are starting to dig into Windows 10 S to see what else is new.

As it turns out, quite a bit. ZDNet’s Ed Bott discovered the the inability to run any apps from outside the Windows Store is just the tip of the iceberg. 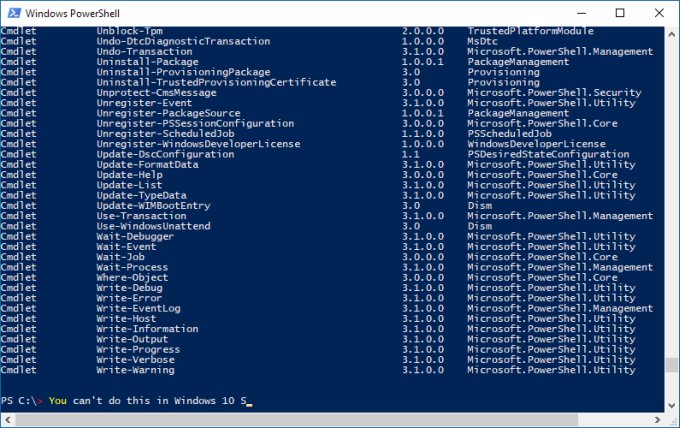 First up, a little clarification: Windows 10 S isn’t limited to running Universal Windows Platform apps. But apps do need to be signed by the Windows Store. In other words, apps like iTunes and Spotify which are distibuted through the store will run even if they’re just slightly modified Win32 apps. This helps set Windows 10 S apart from the now-defunct Windows RT, which could not run Win32 apps.

But while you could sideload any supported app onto a Windows RT device without going through the Windows Store, that’s not true with Windows 10 S. It really does only run Windows Store apps.

Since certain types of apps aren’t allowed in the Windows Store, here are a few things you won’t ever be able to run on Windows 10 S (unless Microsoft changes its policies):

In other words, you can sync your data to OneDrive and use Windows Defender and you can like it. If you’d prefer to use Carbonite, CrashPlan, MalwareBytes, or Norton, you’ll have to switch operating systems.

The default search engine cannot be changed, nor can default apps. What’s more, you can’t run a bunch of Windows utilities that have long been used by power users, including:

In other words, say goodbye to the command line, registry editor, and a bunch of other tools.

This isn’t an operating system for power users. It’s for people who don’t want to accidentally mess up their computer by installing an application or deleting a file only to find that their system won’t boot. Among other things, Microsoft says that a Windows 10 S computer shouldn’t get slower over time the way that many Windows computers do after you’ve installed and uninstalled dozens of applications.

Don’t like those restrictions? There’s an escape hatch. If you buy a Surface Laptop Microsoft will let you “switch” to Windows 10 Pro for free through the end of the year. Notice Microsoft calls it a switch rather than an upgrade, because the company is suggesting that one operating system isn’t better than the other. They’re just different.