Google’s Chromecast may be designed to let you stream media from Netflix, YouTube Pandora, Google Play Music, and other internet media sites to a TV. But what if you want to stream home videos from your phone to a TV without uploading them to the web first? 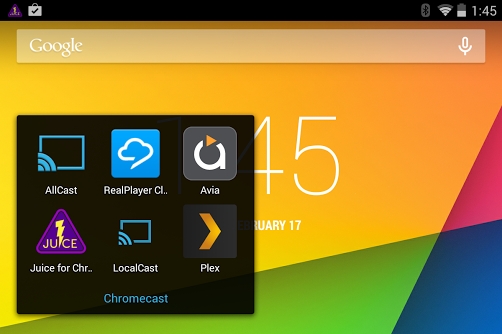 When Google first launched the Chromecast there was no way to do that. But now that the company has released the Google Cast SDK, there are a growing number of ways to stream music, videos, and photos straight from your phone or table to your TV.

Here are some of the first apps that let you stream local content from an Android device to a Chromecast-connected TV. You can use them to watch home movies, downloaded videos, DVD rips, or just about anything else.

Keep in mind that since these apps stream content from your phone or tablet, videos will stop playing if you turn off your mobile device.

This app doesn’t just let you stream local media to a Chromecast. It also supports streaming music, movies, and photos to a Roku, Apple TV, Xbox 360, Xbox One, WDTV, select Samsung, Sony and Panasonic Smart TVs, and other devices that support DLNA.

Just fire up the app, browse your media collection, and pick a file you want to send to your TV. You can use on-screen buttons to pause, play, stop, or skip ahead or back in a timeline. 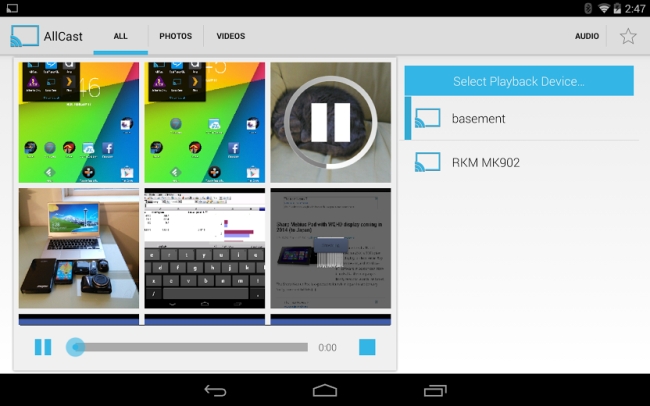 The only catch is that you can only stream up to the first 60 seconds of a video using the free app. AllCast Premium has a $5 price tag (although it’s not available for download as of February 17th, 2014).

Developer Koushik Dutta was among the first to start working on apps that would stream local content to a Chromecast device. He started building AllCast before Google even released a final SDK and eventually wound up launching the app at a time when it could officially support pretty much everything but Chromecast.

Now that the Google Cast SDK is available to all, so is AllCast.

Like AllCast, Avia supports photos, videos, and music. But it also supports Playlists, and unlike AllCast, you can use Avia as a standalone media player to simply watch videos on your Android device.

Or you can tap the Chromecast button and stream content to your TV. 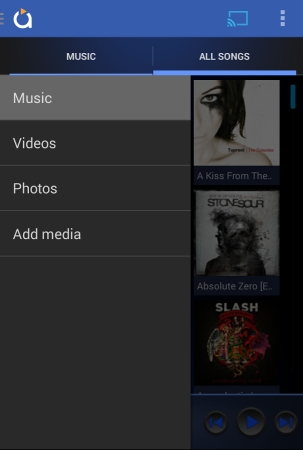 You can use Avia for free if all you want to do is play videos on your Android device. But if you want to beam content to your Chromecast you’ll need to purchase “Avia Extras” through a $2.99 in-app purchase.

Back when Chromecast was just a gleam in Google’s eye, BubbleUPnP was offering users a way to stream videos, music, and photos from a phone to a network-connected TV using an Xbox, PS3, or a range of other devices that support UPnP or DLNA.

On February 19th, the developer launched the first version of BubbleUPnP designed to support Chromecast as well.

You can use the free version of the app to send natively-supported file formats to a Chromecast. Or you can pay for the full version of the app, install BubbleUPnP server on a PC on your network, and transcode videos streamed over your network on-the-fly, allowing you to stream just about anything to a Chromecast (assuming you’ve got a speedy network connection and a relatively fast PC).

Like many other apps on this list, Castaway started as an app that lets you stream local photos or videos from your Android device to a Chromecast. But the developer has added extra features including the ability to send photos and videos from Facebook or Google+ to your TV. 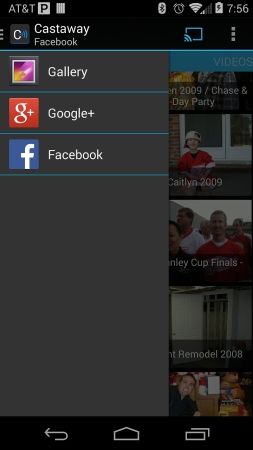 There’s a free, ad-supported version of Castaway. If you want to remove the advertisements, the developer also offers a Castaway Premium for $1.99.

Originally developed as an app for streaming content to an entirely different type of TV stick, EZCast now supports Google Chromecast as well.

You can use it to find photos, videos, or even documents on your Android phone or tablet and send them to your television.

EZCast also includes a web browser that lets you surf the web on your mobile device while seeing the websites on the big screen, a utility that lets you scribble notes or pictures on photos and have the annotations appear on the TV in near real-time, and support for streaming from your phone’s camera to your TV.

The app takes a little while to load and sometimes the connection can be finicky. But EZCast is notable as an everything-but-the-kitchen-sink tool for streaming content to a Chromecast. In fact, I wouldn’t be surprised if a future update added kitchen sink compatibility.

Juice also supports photos, videos and music and allows you to sort your library by date. The free version of the app lets you stream any type of content to your Chromecast — but there’s a catch. You can only stream the first item in your photo, video, or music collection. 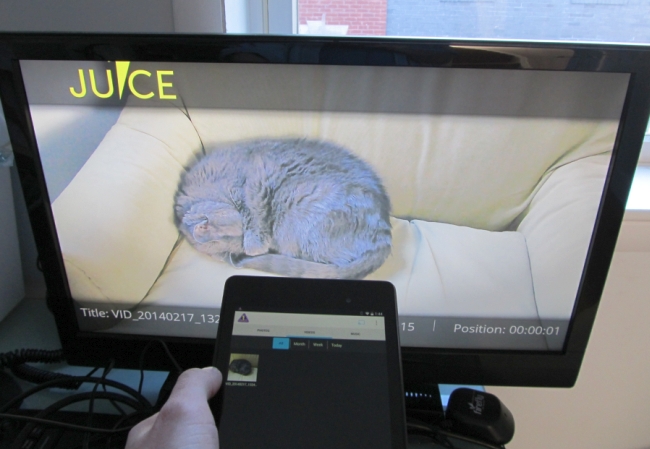 To unlock the ability to stream any media on your device, you’ll need to unlock the full version of the app through a $2.99 in-app purchase).

The best thing LocalCast has going for it at the moment is the price. The app is completely free. The worst thing is that it can be a bit finicky when it comes to file formats. 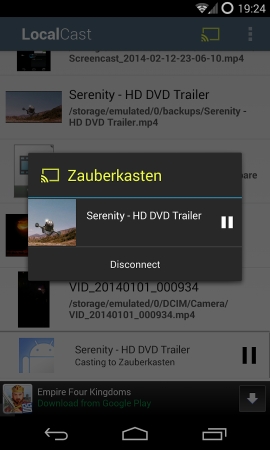 I shot a video with the camera on my Nexus 7 and was able to stream it to my Chromecast using every other app on this list. LocalCast didn’t even see the video.

The developer is considering adding support for additional file formats though. You can read more about LocalCast in the developer’s thread at xda-developers.

Plex is a cross-platform media player designed to let you access local media or internet video or stream your media from one device to another. 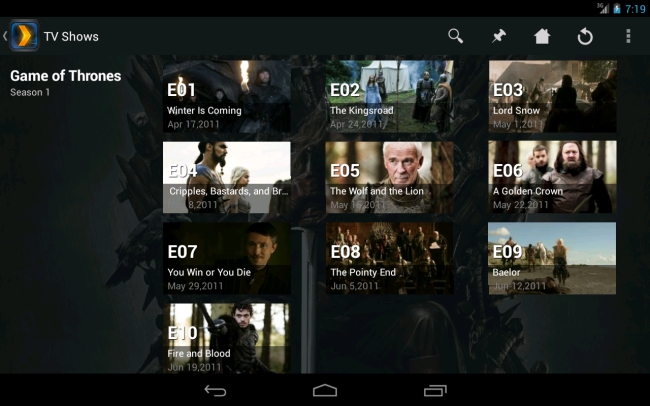 The developers recently added Chromecast support, allowing you to browse your media collection and play it on a TV connected to Google’s media streamer.

Not only do you have to pay $4.99 for the app though, but you also need to be a PlexPass subscriber to use the Chromecast functionality while it’s still under development. Eventually the team plans to make Chromecast features available to all users.

Sign up for RealPlayer Cloud for free and you get 2GB of cloud storage which you can use to upload photos, videos, and other content so you can access it across a range of devices. You can use the RealPlayer Cloud app for Android to browse your collection, watch your videos on your phone or tablet, or stream them to a Chromecast.

But you can also safely disregard the “cloud” portion of this app. Fire up RealPlayer on your Android device, browse for videos on your phone or tablet, hit the Chromecast button and press play. Your Chromecast will grab videos straight from your mobile device using your WiFi network — no uploading to the cloud needed. 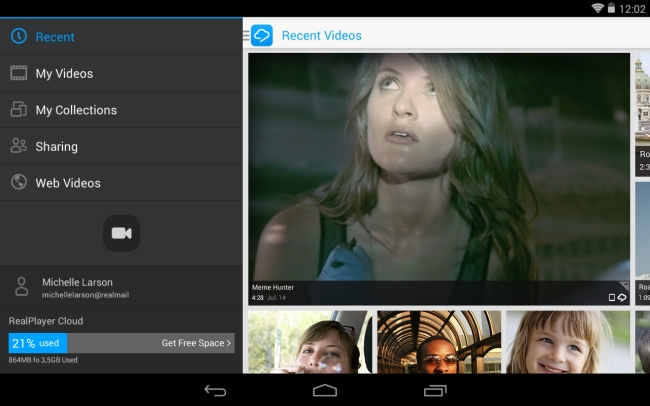 I was kind of surprised at how much I liked this app. You can use it to find popular internet videos to stream to your TV, access your own uploaded videos, or beam local content from your device to your TV.

RealPlayer was one of the early players in online music and video, but the company isn’t exactly known for its cutting edge software these days. That said, as of early 2014, RealPlayer Cloud might just be one of the most versatile apps available for Chromecast users looking to stream local content to their TVs.

Of course, if you want to stream media from Netflix, Hulu Plus, YouTube, HBO Go, or Google Play Movies, all you have to do is fire up those apps and hit the Chromecast button. But we’ve officially moved beyond the point where a Chromecast is just a device for streaming internet video.