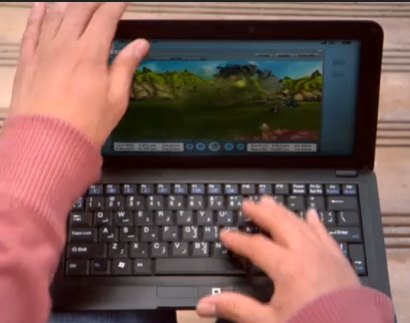 One of the hottest product categories on display at Computex in June was the ARM-powered smartbook. These little computers look a lot like your typical netbook, but they feature low power ARM-based processors that are cheaper than most Intel chips, but a bit slower. On the bright side, many of these chips include built-in support for things like 3G, WiFi, GPS, and HD video encoding. And NVIDIA has built a platform called Tegra, around an ARM-based chip bundled with an NVIDIA graphics processor for high performance graphics on low power devices.

The only catch is that Smartbooks can’t run full versions of Windows. They can handle a number other operating systems including of Linux distributions, Windows CE, and Google Android (which, while it’s based on the Linux Kernel isn’t exactly a Linux “distribution” in the common sense of the word). But since Windows XP, Vista, and 7 haven’t been designed to run on ARM chips, those operating systems are non-starters.

Anyway, so-called “smartbooks” were all over Computex, but they haven’t really hit the streets yet. But DigiTimes reports that’s about to change, with a flood of smartbooks set to hit the market in the fourth quarter of 2009. These machines will reportedly use ARM-based chips including Qualcomm’s Snapdragon and NVIDIA’s Tegra.

DigiTimes says a number of Taiwanese companies, including Acer, Foxconn, Pegatron, Compal, and Inventec are expected to push out these devices soon. If you don’t recognize some of those names, that’s because they’re OEMs or ODMs, meaning they make computers that are distributed and sold by big name companies you probably have heard of. The much talked about Mobinnova élan is expected to be among the early batch of smartbooks to hit the market.

Missing from the list? Asus. While the company helped kick off the netbook revolution by launching the Eee PC 701 in late 2007, Asus reportedly doesn’t think the demand for ARM-based mini-laptops is strong enough to justify launching one right now. Those plans could change.

It’s likely that some or all of these smartbooks will be sold in partnership with phone companies that could bundle the devices with 3G wireless data plans.

Keep in mind, the DigiTimes article is attributed to “industry sources,” so this could all be wrong. While DigiTimes usually has a pretty good track record, the publication ran an article the other day saying that Intel was halting orders of its Atom Z-series processors for netbooks, which prompted an Intel spokesperson to spend a very long weekend doing damage control and explaining that Intel had no such plans.

Update: In other news, DigiTimes reports that ECS and MSI have decided not to launch ARM-powered smartbooks before the end of the year.